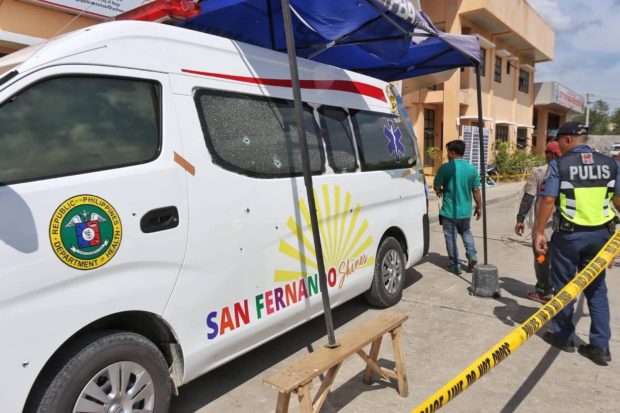 CEBU CITY, Philippines –An ambulance owned by the San Fernando municipal government in southern Cebu was ambushed by still unidentified men in the adjacent city of Naga past 10 p.m. on Monday, May 6.

The ambulance was on its way to San Fernando after they brought a patient to Cebu City when unidentified men aboard a white van opened fired at the vehicle in Barangay Inuboran, the village that straddles San Fernando and Naga, said Major Jason Villamater, Naga City Police Station chief.

Villamater said one of the four passengers of the ambulance was wounded. He however did not identify the wounded passenger.

Villamater said they were still checking if the shooting was related to the ambush of San Fernando Mayor  Lakambini Reluya last January.

Police said the passengers of the ambulance are supporters of the mayor.

“We cannot still conclude it is related to election. It’s difficult to assume. But we are not discounting it,” added Villamater.

Reluya was wounded but her husband,  Ricardo Reluya and a staff member were killed when unidentified men fired at their van in Talisay City, southern Cebu.  /muf