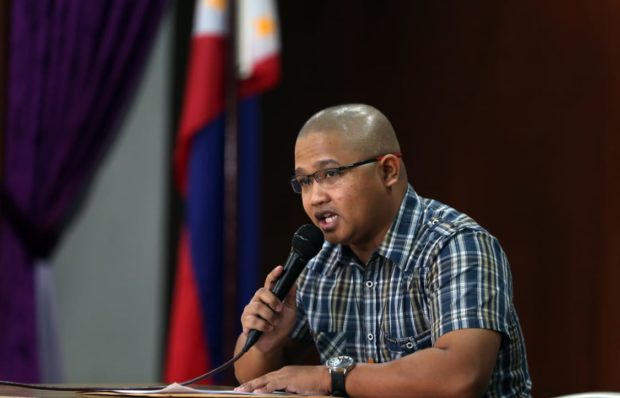 Peter Joemel Advincula (A.K.A.) Bikoy reads his statement at the IBP Multi Purpose hall at the Integrated Bar of the Philippines Ortigas, Pasig on May 06, 2019. PHOTO by Edwin Bacasmas/Philippine Daily Inquirer

MANILA, Philippines — The management of a resort in Albay said Monday they will file a cyberlibel case against ‘Bikoy’ for “maliciously and falsely” tagging the resort as a venue for illegal drug trading.

“Bikoy” is the hooded man in the “Ang Totoong Narcolist” videos that accused President Rodrigo Duterte’s relatives and allies of involvement in illegal drug activities.

In one of the videos, “Bikoy” said Misibis Bay Resort is the “central house facility of Quadrangle Syndicate” and that the basement of the Misibis Bay Island Condominium serves as a drug laboratory.

The resort, however, denied any involvement in the alleged drug trade and said that the claims were baseless.

“Misibis Bay is a first class, family-oriented resort. It has never been used as headquarters or as a front for any kind of illicit trade. Even claims that the resort allegedly uses one of its basements as a drug laboratory is false,” the company said in a statement.

The company said they invited members of the media and the police to check the only basement in the resort where a small kitchen is located.

“All other buildings and villas in the resort have no basement,” the company said.

The company also denied the existence of a “control room” on the second floor of its newest building, saying that the whole floor is used as suite rooms for guests.

The company said the videos caused “irreparable damage” to the reputation of the resort.

“The false and malicious allegations of Bikoy have caused irreparable damage to the reputation and good social standing of Misibis Bay and its owners for which reason he must be held criminally liable,” the company said.

A man named Peter Joemel Advincula, who claims to be “Bikoy,” surfaced at the Integrated Bar of the Philippines (IBP) on Monday afternoon.

Advincula said he went to the IBP to request legal assistance since he plans to submit an affidavit and file a case against the personalities he linked to the drug syndicate in the videos. /ee

Read Next
Sotto to ‘Bikoy:’ Give us proof to spur Senate probe
EDITORS' PICK
Smart sweeps Opensignal’s Mobile Experience awards in Cebu
EuroMillions Superdraw: A lottery draw unlike any other is coming to the Philippines
MRT-3 eyes reducing number of trains after 127 personnel get infected
DOH: Remdesivir shows ‘positive effects’ on COVID-19 patients but not conclusive
Smart releases Hyun Bin’s second TVC
Over 15,000 prisoners freed to decongest BJMP jails amid pandemic—DILG
MOST READ
Army: Soldiers, not cops, in CCTV footage in aftermath of Sulu incident
Lawmakers hit ‘very unfair’ NTC orders vs ABS-CBN
Army loses track of 2 Jolo bombers after agents’ slay
Mayor Labella: ‘Business is hurting in Cebu City’
Don't miss out on the latest news and information.