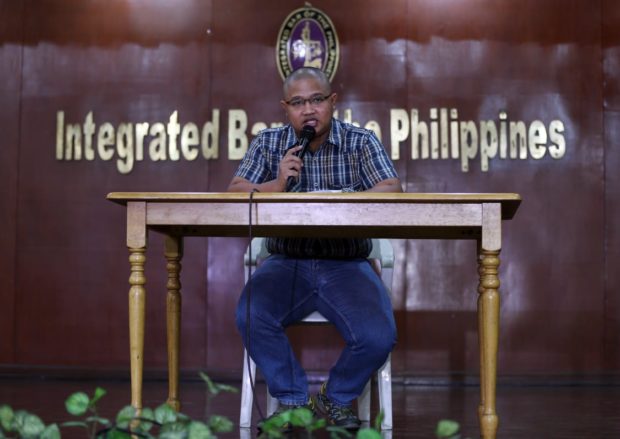 Peter Joemel Advincula (A.K.A.) Bikoy reads his statement at the IBP Multi Purpose hall at the Integrated Bar of the Philippines Ortigas, Pasig. PHOTO by Edwin Bacasmas/Philippine Daily Inquirer

MANILA, Philippines – A man claiming to be “Bikoy,” the elusive hooded guy in the “Ang Totoong Narcolist” series implicating relatives and allies of President Rodrigo Duterte of involvement in illegal drug activities, finally surfaced Monday, a week before the May 13 elections.

In a press briefing at the Integrated Bar of the Philippines (IBP), “Bikoy” identified himself as Peter Joemel Advincula. He claimed he was a former marketing executive at a company called VitaPlus based in the Bicol region.

(I am Peter Joemel Advincula, whom you know more as Bikoy. I am a real person, not a fictional character like what other people say.)

According to Bikoy, he went to the IBP to request legal assistance as he seeks to submit an affidavit and file a case against the personalities he linked to the drug syndicate in the videos.

(This is being led by Paolo Duterte, Christopher Bong Tesoro Go, and Manases Carpio, husband of Sara Duterte of the Davao Group, and the whole Quadrangle Group from Bicol.)

In the viral videos, Advincula claimed that he was a former member of a drug syndicate. He showed transaction records of bank transfers to accounts supposedly owned by some of the President’s close allies and relatives.

Advincula denied being connected to any election candidate or political party, even to the senatorial slate of the opposition.

He likewise denied any connection with media personalities and institutions included in the supposed ouster plot matrix published in a newspaper and confirmed by Malacañang on April 22.

He said he also does not know Rodel Jayme who created the metrobalita.net website where the videos were uploaded.

Advincula said he surfaced due to threats to his life and because he was bothered by his conscience.

“Nagdesisyon akong lumabas dahil una, merong banta sa aking buhay. Ikalawa, dahil sa tawag ng konsensya (I decided to surface because first, there is a threat to my life and second because my conscience is bothering me),” he said.

(I saw how families are destroyed because of drugs, of which I was part when I was still a member of the syndicate. It’s time that this syndicate is destroyed.) /ee 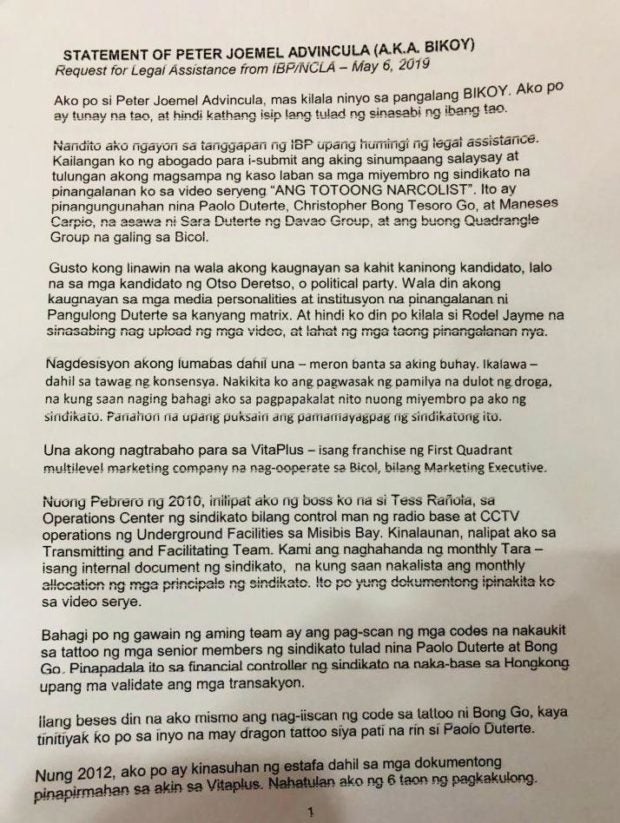 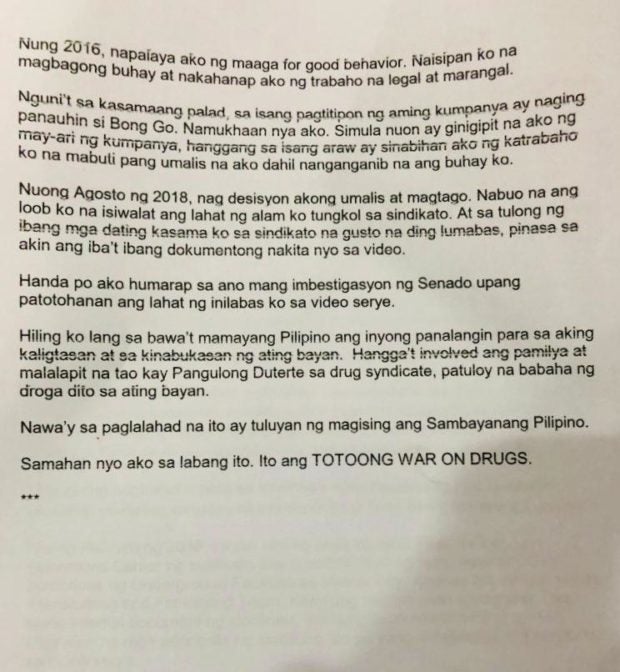