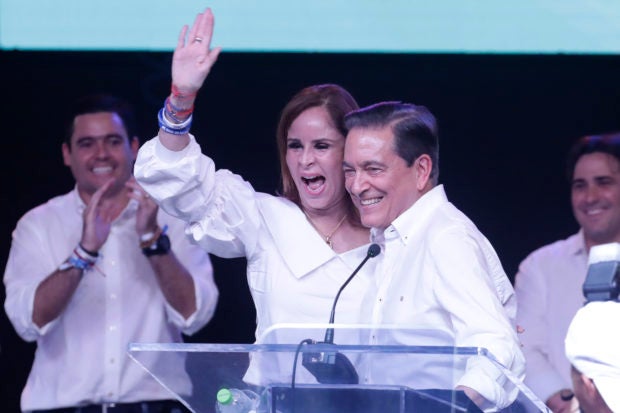 Presidential candidate Laurentino Cortizo, with the Democratic Revolutionary Party, right, and his wife Yazmin celebrate during a meeting with supporters in Panama City, Monday, May 6, 2019. Cortizo, a 66-year-old cattleman, holds on to a narrow lead Sunday night as returns came in from Panama’s presidential election, which followed a campaign that focused on corruption and slowing economic growth in this Central America trade and financial hub. (AP Photo/Arnulfo Franco)

The vote followed a campaign focused on corruption and slowing economic growth in this Central America trade and financial hub and turned into the tightest presidential contest in recent years.

After scrutinizing the results from 92% of polling stations, electoral court magistrate Heriberto Araúz said in a televised announcement shortly before midnight that Cortizo had a narrow lead of 2 percentage points over businessman Rómulo Roux.

The unexpectedly close race pitted the candidates of the country’s two most important opposition political forces.

Cortizo, of the Democratic Revolutionary Party, had 33% of the votes versus 31% for Roux, from former President Ricardo Martinelli’s Democratic Change party.

After announcing the results, Araúz took the phone and dialed the candidate, who was waiting at a campaign point with his wife Yazmín and supporters. “You are the virtual winner of the elections for the next five years,” Araúz said.

“With humility I receive the announcement, which is important for the country,” Cortizo told the magistrate during the call. “An announcement of great responsibility.”

Before the magistrate’s announcement, Roux vowed not to concede defeat, saying the results were too close and suggesting that the race was marred by irregularities.

“We have to guarantee the protection of the electoral process and of democracy. Right now, it’s in doubt,” Roux said, without providing any evidence of election tampering.

The PRD, which has social democratic leanings, will return to power for the third time since the transition to democracy three decades ago, after the end of the military regime.

The last time it in power was from 2004 through 2009 during the administration of Martín Torrijos.

There is no runoff in Panama, so the top vote-getter in the field of seven mostly business-friendly candidates wins outright and takes office July 1 for a five-year term.

The election followed revelations of money laundering in the so-called Panama Papers that dinged the country’s reputation on the world stage.

The trove of secret financial documents showed how some of the world’s richest people hid their money using shell companies in Panama and other countries.

Despite the scandal, Panama remains a strategic location for commerce, anchored by the heavily trafficked Panama Canal shipping route and a recently expanded international airport.

Cortizo, a 66-year-old who studied business administration in the U.S., was agriculture minister under Torrijos and campaigned on vows to clean up Panama’s image after the corruption scandals.

“For Panamanians, as well as many other Latin Americans these days, corruption trumps all other issues, even inequality,” said Michael Shifter, president of the Inter-American Dialogue.

“In country after country in the region, people are just fed up and are demanding a real change.”

Roux, a 54-year-old businessman, had the endorsement of supermarket magnate and former President Ricardo Martinelli, who is in jail awaiting trial on charges of political espionage.

Roux highlighted during his campaign that Panama’s economy grew only 3.8% last year, versus a 10.7% expansion in 2012, when Martinelli was president.

But Roux’s association with Martinelli appeared to have hurt his bid for the presidency, said Shifter.

The top three was rounded out by an independent candidate who got on the ballot by collecting thousands of signatures. Ricardo Lombana, 45, is a lawyer who gained prominence via a citizen’s movement several years ago that questioned impunity and corruption in the country.

Lombana had nearly 20% of the vote.

Lombana’s campaign focused on drumming up support via social media, rather than through the costly television spots favored by candidates from Panama’s three main political parties.

Turnout was strong at 72% for Panama’s sixth presidential election since a U.S. invasion ousted strongman Manuel Noriega in 1989.

Outgoing President Juan Carlos Varela, a 55-year-old conservative and liquor industry veteran, was barred by the constitution from running. /gsg