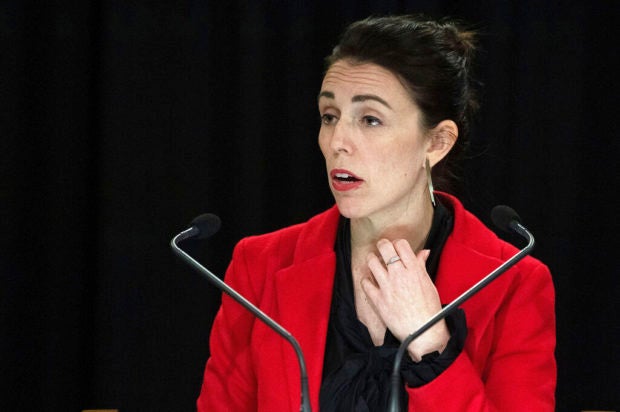 Prime Minister of New Zealand Jacinda Ardern speaks to the media with her engagement ring on her left hand during her post cabinet press conference in Wellington, New Zealand on May 6, 2019 . AP

WELLINGTON, New Zealand — New Zealand’s Prime Minister Jacinda Ardern on Monday joked that her partner’s marriage proposal was an intimate moment with just the two of them, a police protection officer, a couple of locals and a dog that tried to eat chocolate her partner had brought with him.

Ardern was speaking publicly for the first time about her engagement to her longtime partner Clarke Gayford over the Easter break in the town of Mahia. She said she was taken by surprise by Gayford’s question and the couple has yet to make any wedding plans.

Reporters on Friday noticed Ardern wearing a ring on her middle finger, a variation from the traditional ring finger, and her office later confirmed the couple was engaged.

“So I have not been trying to hide our news from anyone,” she said. “It simply doesn’t fit on the right finger, so that’s why it’s sitting in the middle.”

Ardern said Gayford had proposed to her atop a hill with a “beautiful” outlook in the coastal township. She said the proposal was so low key that the police officer from the Diplomatic Protection Service (DPS) assigned to her had no idea what was going on.

“It was Clarke, myself, a member of the DPS, so very intimate,” she joked. “A couple of locals from Mahia, and a dog which then tried to eat the chocolate that Clarke bought me at the same time. So it was very romantic.”

Speaking at a news conference in Wellington, Ardern declined to answer some questions about the proposal or show off her ring.

“This is a very public job and I’m quite happy to put quite a bit of ourselves out there,” she said. “But there are some things I wouldn’t mind keeping to ourselves.”

Gayford is Neve’s primary caregiver and a presenter on a TV fishing show.

The 38-year-old Ardern was widely praised for the compassion and leadership she showed after a gunman killed 51 worshippers at two mosques in Christchurch on March 15. Ardern has since helped introduce new gun restrictions in New Zealand and spoken out about the way the gunman was able to use social media to promote his views.

Time magazine last month included Ardern on its list of the 100 most influential people in 2019. /ee