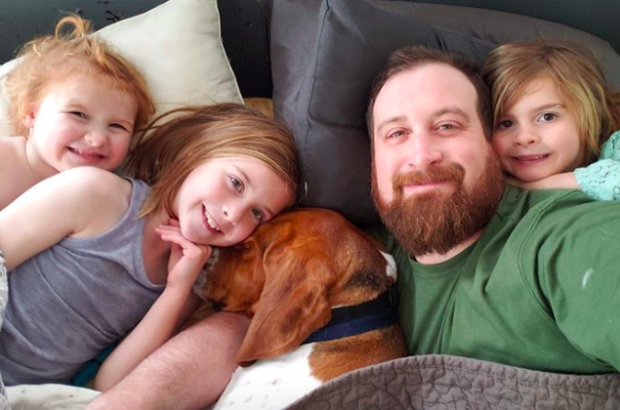 A rescue dog, who was once called “unadoptable,” saved his adoptive family from an intruder who was wanted for kidnapping their 4-year-old neighbor a few days before the break-in.

The Lambert family were sleeping peacefully in their home in Pennsylvania, USA, when their rescue dog, Edgar, suddenly barked nonstop. According to PennLive on May 2, an intruder allegedly broke into their house, causing the dog’s outrage.

“[Edgar] started losing his mind. It was pure rage,” the father, Thom Lambert, was quoted as saying.

Lambert immediately suspected that it was Thomas Dewald, a 20-year-old suspect who allegedly abducted 4-year-old Gemma Moats from the same neighborhood on April 25. While the girl escaped, Dewald had not been arrested.

According to Lambert, whose children are aged 3 to 8, Edgar barked the same way during the abduction of Moats, and he suspected that Dewald also planned to break in and abduct his kids. “He was really drawn to take one of our kids,” he said, as per report.

Dewald was arrested on April 29, as per Lambert’s Facebook post. According to PennLive, he now faces eight charges including kidnapping and burglary.

The suspect told the police that he “saved” Moats from “deplorable conditions,” while he decided not to abduct the Lambert children as their living condition was “acceptable.”

Lambert, however, did not believe his statement, saying, “He can say what he wants but we know he came to our house to take one of our kids and he got run off by our dog. That’s what I’d like the focus to be on right now, the fact that our really awesome dog saved our girls.”

Meanwhile, the Lambert family has been recovering from the incident. “We need help standing today. We [have not] slept. We [do not] feel safe. We feel tainted,” Lambert said. “There is so much love in this house. And you can’t take it from us.”

Sunday morning at 345 AM, a human monster broke into our house, and set out to abduct and do something much worse to…

Edgar, a 4-year-old Treeing Walker Coonhound, lived on the streets before getting adopted by the mother, Melissa Lambert.

“[We are] incredibly lucky to have this dog,” Thom Lambert said.  Casey Eridio /ra