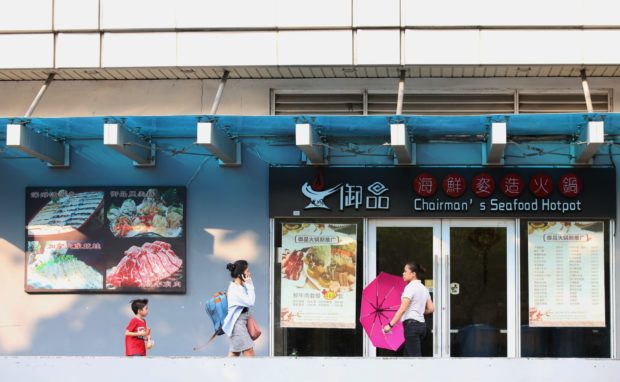 CHINESE CUSTOMERS Shops, including a restaurant, display Chinese advertisements and reportedly cater only to Chinese customers on the ground floor of Linea building on Mayapis Street in Makati City. —LYN RILLON

MANILA, Philippines — The government should shut down restaurants and other businesses exclusively catering to Chinese nationals staying in the country, Sen. Panfilo Lacson said on Sunday.

Lacson also called on the Department of Trade and Industry (DTI), local governments and other state agencies to use their authority and keep investors from China out of small- and medium-sized enterprises (SMEs).

“We should prioritize Filipino entrepreneurs,” Lacson said in a radio interview.

“If investors coming from China would do business even in SMEs, that will be alarming because many of our countrymen will be deprived of investment opportunities,” he said.

“[I]f they come here with billions of pesos [to invest], there’s no reason why we should not welcome them because that will help our economy to grow,” Lacson said.

“What’s worrisome is if the Chinese investors would … compete in running variety stores, restaurants and merchandising, which only require small investment money,” he said.

The senator’s remarks came after netizens blasted on social media a restaurant in Alabang, Muntinlupa City, called China Food City that barred Filipinos from its premises as it was serving only Chinese workers employed in nearby online gaming companies.

There have also been reports that several convenience stores owned by Chinese nationals in Makati and Pasay cities also do not welcome Filipinos.

Too many in Boracay

In April, residents and businessmen in Boracay complained about a sudden increase in the number of Chinese restaurants operating along the main road on the world-famous resort island.

The restaurants, they said, do not have signs in English or Filipino and their menus are written only in Chinese.

Their staff — cook, cashier, waiters, laborers and drivers —
are all Chinese. And they serve only Chinese who come on group tours.

The influx of Chinese workers began in 2016, after China pledged billions of dollars in aid and investment to help President Rodrigo Duterte develop his infrastructure program.

The President had set aside a UN arbitral court’s ruling in favor of the Philippines in a challenge to China’s claim over nearly the entire South China Sea in exchange for aid, loans and investments.

With the aid and pledges, however, came a stream of Chinese tourists who overstayed their visas and ended up working in online gaming centers, Chinese-funded infrastructure projects and Chinese-owned businesses, including restaurants and barbershops.

Not done in China

“Try to go to China and put up a store that sells goods without Chinese [markings] and [are] exclusive[ly] for Filipinos. You will be deported [the next day],” Lacson said.

He said the DTI, the Department of Labor and Employment, and the Bureau of Immigration must work closely together and form a task force to look where Chinese had made investments in the country.

Lacson said these government agencies should ensure that Chinese businessmen were engaged only in private enterprises that needed huge investments and not in small businesses.

“They must closely scrutinize what kinds of investments are being brought here. I think they should discourage if the investment would deprive our countrymen the chance to make their lives better by having their own small business,” he said.

“It’s really annoying that Filipinos are being prevented from entering restaurants [here in our country]. We’re being treated like second-class citizens in our own land,” he said.

“We are here in our country. Why will you be prohibited from eating in a Chinese restaurant [here]? That [restaurant] should be immediately closed down,” he said.

The labor department, immigration bureau and a couple of other government agencies have laid down stricter policy to end the abuse of special work permits and put a stop to the influx of Chinese illegal workers into the Philippines.

No agency, however, has looked into the reports of Chinese-only businesses that have mushroomed in the country since 2016. —Reports from Marlon Ramos and Inquirer Research