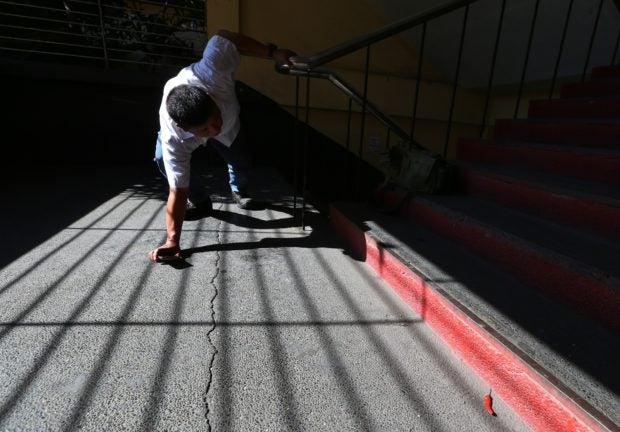 DAMAGE INSPECTION Security officer Julian Vargas Jr. inspects cracks on the stairs of a building at Tondo High School after the 6.1-magnitude earthquake on April 22. Experts say there is no such thing as “earthquake-proof” structures. —LYN RILLON

MANILA, Philippines — The timestamp on the CCTV footage read 5:07 p.m. on April 22, 2019. Within five seconds of the 6.1-magnitude quake, the ceiling fell, causing people inside Chuzon Supermarket in Porac, Pampanga province, to panic.

Five were killed, while nine were injured in the disaster.

A total of 18 people died and 256 were injured in Central Luzon and Metro Manila. Three were reported missing.

In the following days, news cycles and social media would be filled with similar images: swaying high-rise buildings, road cracks and tilted structures.

Sitting on the Pacific Ring of Fire, the Philippines is no stranger to frequent seismic and volcanic activities. Earthquakes of smaller magnitudes happen regularly, while destructive earthquakes are rare.

Despite routine drills in schools and offices and increased public awareness, Filipinos are hardly ready for destructive quakes that may hit the country any time, according to experts.

“The Philippines is under constant threat,” said Mahar Lagmay, executive director of the University of the Philippines (UP) Resilience Institute. “Because we have a lot of faults, when they move, they may generate earthquakes that may be big and life-threatening.”

“We are hardly prepared because we hardly understand the magnitude of [a destructive] earthquake, because by nature, they are so rare and few,” said civil engineer Benito Pacheco, a UP professor.

“In Metro Manila, for instance, many of us don’t have firsthand experience with such quakes and in that sense, we don’t understand the potential effects,” he said.

For Metro Manila, the so-called Big One is expected to happen anytime, threatening the disruption in the country’s political and economic center.

Two major fault lines are nearby: the West Valley Fault (WVF), which runs from Bulacan province, along the eastern side of the metropolis and all the way down to Laguna and Cavite provinces; and the Manila Trench, west of Luzon that may trigger a tsunami once it moves.

In 2013, a study called the Greater Metro Manila Risk Analysis Project projected that a 7.2-magnitude quake along WVF could cause the collapse of structures within a 1,100-hectare zone.

Over 37,000 people may be killed, and the disaster may result in P2.4 trillion in economic losses.

An earlier study in 2004 said a similar scenario may result in heavy damage to at least 10 percent of midrise and high-rise buildings in Metro Manila.

While studies have mapped out the projected damage and casualties once an earthquake strikes, the infrastructure and population boom over the past few years has increased the exposure to risk, Pacheco said.

But while quakes may strike at any given time, it is the collapse of buildings that kills people—and the other hazards that come after, such as landslides, fires and tsunamis.

In the Philippines, the National Building Code ensures that structures that are compliant may withstand Intensity 8, or a “very destructive” earthquake on the Philippine Institute of Volcanology and Seismology (Phivolcs) earthquake Intensity Scale, according to Pacheco, an expert in earthquake engineering.

But he noted there was no such thing as “earthquake-proof” structures.

“None of the laws really lead to ‘proofing’ or reducing to zero all of the risks, but they can keep the risks to acceptable levels,” he said.

“Damage may still be sustained by the buildings, but not [lead to] sudden collapse.”

Instead, “earthquake-resistant” or “earthquake-resilient” is the more accurate term for structures properly built to withstand quakes, if compliant with building laws, particularly the building code and the Structural Code of the Philippines.

Quakes would have varying effects on buildings, Lagmay explained, whether low-, mid- or high-rise, depending on the distance of the quake from the structures, as well as its magnitude and intensity.

Such was the case for high-rise buildings in Metro Manila that were swaying during the Zambales quake two weeks ago.

In August 1968, Metro Manila bore the brunt of a 7.3-magnitude quake that hit Casiguran, Aurora province, more than 300 kilometers away.

It caused the collapse of Ruby Tower Apartments, a six-story building in Binondo, killing at least 270 people. At least 17 buildings in Manila were damaged.

During that time, the building code had not yet been enacted. The law was passed four years later, in 1972.

An explanatory piece written by Pacheco and published in the Inquirer in 2011 said that over 35 percent of low-rise residential buildings in the metro and other regions “may not be complying” with government standards, because they were either “nonengineered structures” or were built according to much older, inadequate standards.

With “very high-rise” buildings, or those with more than 30 stories, more than 10 percent may be noncompliant as well.

But in a recent interview with the Inquirer, Pacheco noted that there is no data available as to how these numbers might have improved over the past 15 years, if at all.

Conflicting regulations are among the reasons for noncompliance, he said.

For instance, old structures, including heritage sites such as churches, are covered by a different law, the National Cultural Heritage Act.

Another reason is that certain provisions of the code are ambiguous and are not well-translated, Pacheco said.

Considering population growth and more infrastructure across the country, there is a need for an upgraded and updated building law, he noted.

“It is not enough to change standards or details at the bottom; it is necessary to change the setup of the building law. . . and be more thorough in multihazard reduction,” he said.

In line with this, a project between the UP National Engineering Center and the UP Law Center proposes a new Philippine Building Act.

Aside from technical provisions, the project looks into the administrative and penal provisions of the proposed law to strengthen its implementation and enforcement.

Pacheco noted that under the new code, no structures should be exempt from its design and construction requirements.

The present law exempts “traditional indigenous family dwellings,” often made from native materials such as bamboo, nipa and lumber, that are intended for the use of the owner’s family alone.

“We should make the building permit processes more risk-informed and not just one size fits all,” he said. “In the law reform, we are also proposing to compel old buildings to be assessed.”

Since the passage of the proposed legislation would take time, households should exert efforts to learn and recognize the vulnerability of their buildings and voluntarily retrofit them if necessary, Pacheco said.

In 2014, Phivolcs launched a 12-point questionnaire titled “How Safe Is My House?” to guide owners of houses made from concrete hollow blocks in checking the structural integrity of homes.

Questions include the age of the house, previously known damage, as well as its overall condition.

But while private citizens are urged to make the necessary changes, Pacheco said the government should lead by voluntarily upgrading its buildings.

“I think they should take the lead in a massive scale to invest in government-owned and -controlled structures and to lead by example,” he said.

“We shouldn’t build more if we cannot build better.”