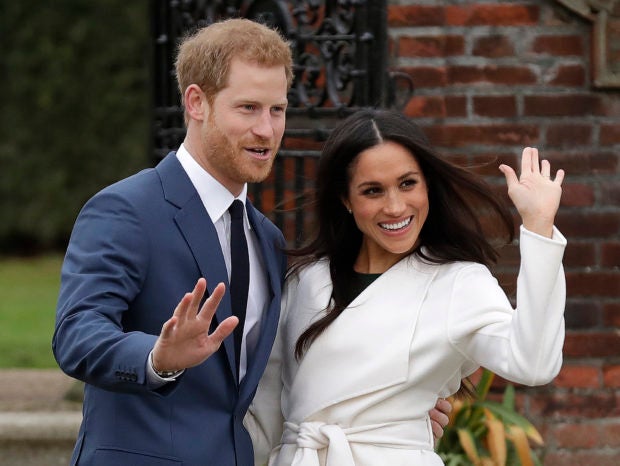 Britain’s Prince Harry and his fiancee Meghan Markle posed for photographers during a photocall in the grounds of Kensington Palace in London. Image: AP/Matt Dunham

LONDON — The baby wait goes on for Meghan, Prince Harry and royal-watchers around the world.

Media and well-wishers were camped out in Windsor on Saturday — as they have been for days — awaiting the birth of the couple’s first child.

The royal couple have not revealed their birth plans or due date, though Meghan said months ago that the baby was due in late April or early May.

On Friday, Buckingham Palace postponed a planned May 8 trip by Harry to Amsterdam for “logistical” reasons. The palace says the prince still plans to attend an Invictus Games event in The Hague the next day.

Meghan is not expected to have the baby at St. Mary’s Hospital in London, where her sister-in-law Kate had all three of her children. She is sticking closer to the couple’s home near Windsor Castle, some 32 kilometers west of the British capital.

The baby will be seventh in line to the British throne and the eighth great-grandchild of Queen Elizabeth II.

Harry and Meghan are not expected to present the new arrival to the public immediately after its birth.

The palace has said that “they look forward to sharing the exciting news with everyone once they have had an opportunity to celebrate privately as a new family.” CE/JB

Harry and Meghan: Newest royal baby could be an American

ADVERTISEMENT
Read Next
Village watchman to file rap vs mayor he accuses of slapping him
EDITORS' PICK
Smart releases Hyun Bin’s second TVC
DOH to present new method of reporting COVID-19 cases next week
Almost 4,000 former communist rebels get financial aid from gov’t–DILG
Philippines logs 1,494 new COVID-19 patients; tally now at 41,830
EuroMillions Superdraw: A lottery draw unlike any other is coming to the Philippines
Water remains our saving grace right now
MOST READ
NAIA Terminal 3 to open for international flights starting July 8
Lacson calls report ‘malicious,’ but journalist says she tried to contact him
‘Keep our silence:’ Duterte tells troops not to avenge slain agents
As Ringo Starr turns 80, he talks about his life, Beatles journey, including that unfortunate Manila experience
Don't miss out on the latest news and information.