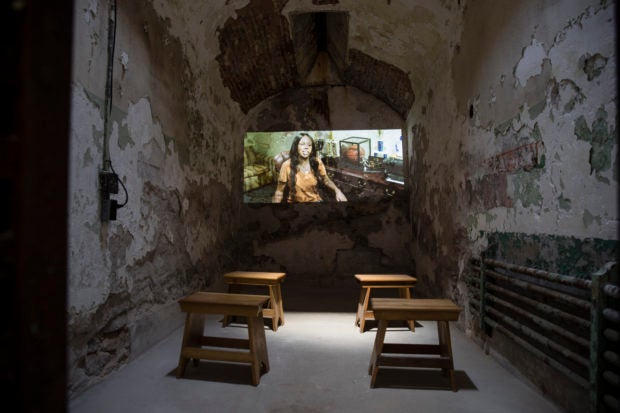 A video installation by filmmaker Dehanza Rogers’ titled #BlackGirlhood is shown at the Eastern State Penitentiary, Thursday, May 2, 2019, which is now a museum in Philadelphia,. Image: AP/Matt Rourke

When mobster Al Capone was jailed in Philadelphia in 1929, one newspaper portrayed his cell as a luxurious lockup, adorned with richly colored oriental rugs, polished wood furniture and other trappings the mob boss told the reporter were “very comfortable.”

The Eastern State Penitentiary, which is now a museum, worked hard to recreate the cell to fit that description.

Turns out, that account might not have been entirely accurate, and a key detail was missing: “Public Enemy Number One” had a roommate.

What started in January as a simple project to repaint Capone’s cell turned into a complete reworking of it and led to an entirely new exhibit.

The new Capone cell, now with an extra cot and less fancy decor, opened to the public Thursday.

Workers prepping for the paint job found dozens of layers of highly decorated paint on the walls of the cell, one depicting an apparent mural, another with intricately painted faux wood grain, said Liz Trumbull, manager of historic preservation at Eastern State Penitentiary.

They decided to preserve the various paint examples in Cell 1, and move the Capone exhibit next door to Cell 3. It was never certain that Capone was housed in Cell 1 to begin with, said Sean Kelley, director of interpretation at the museum; he could have been in any of the four cells that held high-profile prisoners, a stretch dubbed “Park Avenue”.

“As we began to research what the cell looked like at the time, we began to question if his treatment was as luxurious as portrayed,” Kelley said.

They discovered that the day after the Public Ledger reporter wrote about Capone’s fancy digs, a journalist from a competing paper found that the mobster’s abode was not the lap of luxury.

“Capone’s cell, which he shares with an embezzler known as ‘Bill’ Coleman, prison statistician, doesn’t look like the cozy den of a king of leisure,” reads the Philadelphia Record account from Aug. 21, 1929. It goes on to describe a small table with a vase of gladiolas, a prison-made rag rug on the floor, a dresser and two cots at the rear of the cell. The only fancy detail was a “smoking stand in the form of a butler.”

“It is by no means the most luxuriously furnished cell in the prison. There are others that are more sumptuous,” the article ends.

The museum has recreated the room to better match that description but retains other items from the previous exhibit, including the period radio that plays waltz music.

Another addition is a roll of toilet paper by the commode, underscoring the new understanding that Capone didn’t have privacy, Kelley said.

“Even with all of his money and all of his fame he was still living in prison, and people in prison don’t have much privacy,” he said. “When he used the toilet, his roommate was in the same room.”

Capone dominated organized crime as a bootlegger in Chicago during the period when liquor was banned. His legend grew in 1929 with the St. Valentine’s Day Massacre — when seven men linked to a rival gang were lined up facing a garage and shot dead. No one was ever charged in the deaths, though experts point to Capone.

In August 1929, Capone and his entourage were driving back to Chicago from Atlantic City when he was apprehended on concealed deadly weapon charges in Philadelphia. Some accused him of tipping off authorities himself to arrange his arrest as a way to hide out from escalating gang violence.

Capone so terrorized the public that federal authorities couldn’t get witnesses or associates to rat on him for any violent crimes, forcing them to pursue a lesser charge of tax evasion. CC

Read Next
Alejano dares Duterte, Panelo: Resign over ‘irresponsible Oust Duterte matrix’
EDITORS' PICK
NCR’s COVID-9 alert level may be downgraded from 3 to 2 soon — DOH
Biden vows to stand with Asia on freedom, hits at China on Taiwan
Legarda emphasizes role of ICC/IPs in nation building this IP month
What’s at stake for every fighter at ONE: NextGen
Climate Change Commission and Nestlé PH to discover sustainability-focused solutions
FDA reviewing COVID-19 vaccines’ EUA for booster shots
MOST READ
Drivers now required to take driver’s education upon license renewal – LTO
Gordon to Duterte: You? Teaching me courtesy?
Marcos Jr’s ‘special diploma’ from Oxford: You can have it, too
Can Marcos Jr. be disqualified?
Don't miss out on the latest news and information.