CARACAS, Venezuela – Venezuelans heeded opposition leader Juan Guaidó’s call to fill streets around the nation Wednesday but security forces showed no sign of answering his cry for a widespread military uprising, instead dispersing crowds with tear gas as the political crisis threatened to deepen.

Thousands cheered Guaidó in Caracas as he rolled up his sleeves and called on Venezuelans to remain out in force and prepare for a general strike, a day after his bold attempt to spark a mass military defection against President Nicolas Maduro failed to tilt the balance of power.

“It’s totally clear now the usurper has lost,” Guaidó proclaimed, a declaration belied by events on the ground. 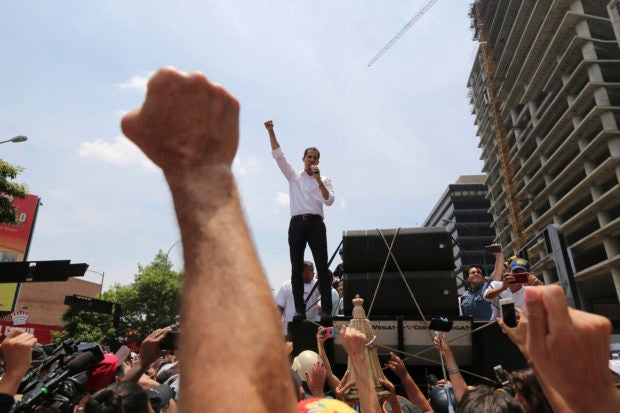 Opposition leader Juan Guaidó speaks to supporters in Caracas, Venezuela, Wednesday, May 1, 2019. Thousands gathered to demand President Nicolas Maduro’s ouster in what could be another critical day in the nation’s struggle between a widely detested socialist government and an opposition backed by powerful allies like the United States but unable to secure the loyalty of key factions like the military. (AP Photo/Fernando Llano)

Across town at the Carlota air base near where Guaidó made his plea a day earlier for a revolt, intense clashes raged between protesters and troops loyal to Maduro, making clear the standoff would drag on.

“I don’t want to say it was a disaster, but it wasn’t a success,” said Marilina Carillo, who was standing in a crowd of anti-government protesters blowing horns and whistles.

Opposition leaders hoped Guaidó’s risky move would stir a string of high-ranking defections and shake Maduro’s grip on power. But only the chief of Venezuela’s feared intelligence agency broke ranks, while most others stood steadfast.

Some analysts predicted that would make Maduro more emboldened.

The dramatic events could spell even more uncertainty for Venezuela, which has been rocked by three months of political upheaval since Guaidó re-energized a flagging opposition movement by declaring himself interim president, saying Maduro had usurped power.

Now the struggle has heightened geopolitical dimensions, with the United States and more than 50 other nations backing Guaidó as Venezuela’s legitimate president and Maduro allies like Russia lending the beleaguered president military and economic support.

U.S. National Security Adviser John Bolton said Wednesday that Maduro is surrounded by “scorpions in a bottle” and that key figures among his inner circle had been “outed” as dealing with the opposition.

The United States contends Maduro had been ready to flee Tuesday, an airplane already on the tarmac, but was talked out of it by Russian advisers.

Maria Zakharova, a spokeswoman for Russia’s Foreign Ministry, said such assertions were part of a “global information and psychological war against Venezuela and Caracas.”

“There is no proof there was a Russian plane there,” she said.

“The U.S. is big on Venezuela and wants to bring this to an end but that cannot do that.”

Protesters like Beatriz Pino, who took to the streets Wednesday waving flags and banging pots and pans, said they weren’t entirely surprised by the military’s response to Guaidó.

She said the late President Hugo Chavez politicized Venezuela’s military as he installed a socialist system. Despite the setback, she said she remained committed to the opposition’s call for protest.

“We can’t leave the streets,” she said. “We’ve been in this for years.”

As the standoff drags on, life is becoming even more difficult for Venezuelans, who are struggling with hyperinflation that has rendered salaries worthless as well as severe shortages of food and medicine that have driven about 3 million people to flee the country in recent years.

“We need to get out of this tragedy,” said Ana Camarillo, a housewife.

David Smilde, a Venezuela expert, said the opposition’s thus far unsuccessful attempt to trigger an uprising should provoke a round of reflection.

“Given the balance of power within Venezuela and the geopolitical struggle around it, they need to engage in real politics and real negotiations to move this conflict to a different place,” he said.

Luis Scott was among those wearing bright red shirts in solidarity with the socialist government and said he traveled seven hours on a bus to participate in the rally.

He conceded Venezuela has deep economic troubles, but said the path set by Chavez and Maduro is firm.

“We are fighting for our freedom,” the fisherman said.

While Maduro maintains a devout core of fervent supporters first inspired by Chavez, attendance at such shows of support is viewed as a requirement of their jobs.

At the Plaza Francia in Caracas’ Altamira neighborhood, protesters jammed the streets in one of the opposition’s biggest demonstrations yet.

A few blocks away the scene quickly turned ugly. Protesters surrounded a suspected thief, beating him until he bled.

A man with a megaphone appealed to the crowd to return to the fight against police.

“The fight is down there!” he said, gesturing to the direction of a military base.

Mayor Gustavo Duque said the Salud Chacao medical center took in 27 patients by late afternoon Wednesday, one of whom was shot in the foot by a firearm.

Those injuries are on top of more than 50 reported by the hospital’s director during clashes Tuesday.

Maduro appeared at the socialist party rally Wednesday afternoon, saying U.S. leaders had been fooled by the opposition into believing he was about to flee Venezuela.

He said the Trump administration was part of a “pot of lies” and likened the ordeal to “fake news.” /gsg