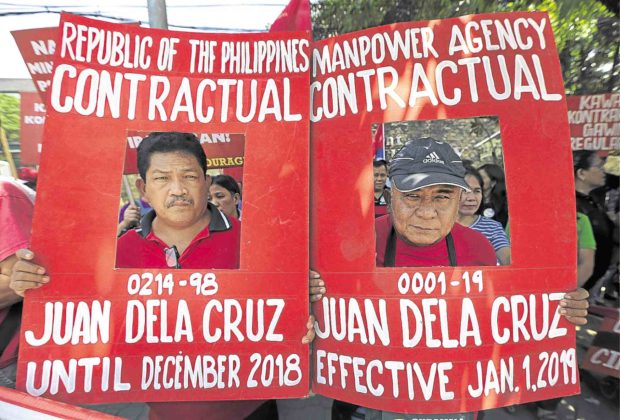 In September 2018, President Rodrigo Duterte certified urgent a Senate bill ensuring security of tenure, a campaign promise to workers who have been protesting for years against contractualization that employers use to evade regularizing and giving full benefits to their workers. (File photo by GRIG C. MONTEGRANDE / Philippine Daily Inquirer).

MANILA, Philippines — Labor Secretary Silvestre Bello III said on Wednesday that he had already secured the commitment of three senators to pass the security of tenure (SOT) bill by the end of the 17th Congress.

Earlier, the Associated Labor Unions-Trade Union Congress of the Philippines earlier slammed the Department of Labor and Employment (DOLE) for supposedly not doing enough to lobby for the passage of the measure.

But during the Labor Day celebration in Pampanga, Bello told reporters: “Sen. Joel Villanueva, together with Senators Miguel Zubiri and Richard Gordon, committed that in the remaining seven session days [of Congress] they would finish the SOT bill.”

The House of Representatives was able to pass in January 2018 House Bill No. 6908, which aims to strengthen the security of tenure of workers. But its counterpart measure, Senate Bill No. 1826, had languished in the Senate.

This is despite the fact that President Rodrigo Duterte certified the measure as urgent last September.

Bello pointed out though that what the DOLE lacked was not the initiative to push for the measure but time.

According to the Nagkaisa labor coalition, ending contractualization remains to be one of the President’s “greatest unfulfilled promises.”

The coalition noted that if the Duterte administration was indeed serious in its desire to improve the lives of workers, it should “pressure” its Senate allies to come up with the measure addressing this longstanding labor issue.

The group alleged that they were not provided details when they asked what the senator’s issues were regarding the measure.

“As an accountable elected official, she should disclose what are her proposed amendments to help speed up discussions. She is delaying the process for the SOT to be passed,” Nagkaisa Chairman Sonny Matula said.

Sentro secretary-general Josua Mata noted that one of the reasons why there was stiff opposition to the passage of the SOT is because employers fear workers would be able to form unions, allowing them to fight for their rights.