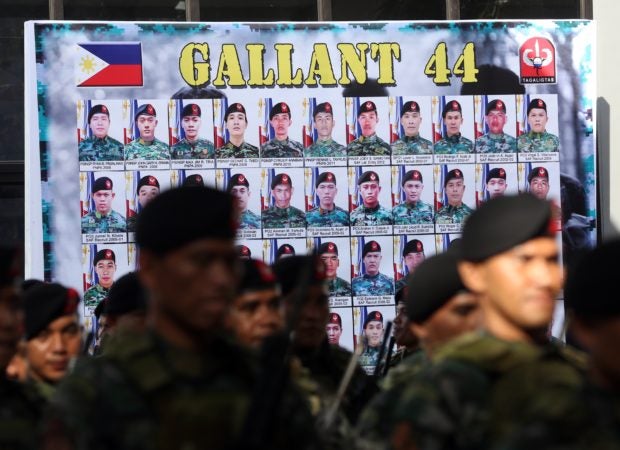 MANILA, Philippines – The Supreme Court has granted the appeal of the Volunteers Against Crime and Corruption (VACC) to allow its 15 magistrates to tackle the petition regarding the criminal cases against former president Benigno Aquino III over the death of 44 Philippine National Police – Special Action Force (PNP-SAF) commandos during an operation in  Mamasapano, Maguindanao in 2015.

“The Court (sitting in full court) resolved to accept this case which was referred to it by the first division in the latter’s resolution dated February 20, 2019,” read the resolution received by petitioners last April 24.

Ferdinand Topacio, counsel for VACC and families of the so-called SAF 44, immediately welcomed the SC’s decision.

“We thank the Honorable Supreme Court for accepting our appeal for (full court) hearing and resolution of this case. Slowly but surely, justice will be done for the SAF 44,” he said Wednesday.

The relatives of the slain police commandos went to the Supreme Court after then Ombudsman Conchita Carpio-Morales indicted Aquino, former PNP chief Alan Purisima and former PNP-SAF director Getulio Napeñas Jr. before the Sandiganbayan only for graft and usurpation of official function instead of homicide.

“The mothers and widows of the SAF 44 really could not believe how the former ombudsman downgraded the cases against the former president,” he said.

He added that while the Court, in most cases affirms and respects the findings of the Ombudsman, they are hoping that the justices could see the errors in this case.

Last year, the SC issued as restraining order against the Sandiganbayan from proceeding with the case.

To date, it remains in effect.

The case was about the death of 44 members of the elite Philippine National Police – Special Action Forces tracking down  international terrorist Zulkifli Bin Hir, also known as Marwan, and Filipino bombmaker Basit Usman.

In July 2017, the Office of the Ombudsman found probable cause to charge Aquino, Purisima and Napenas with graft and usurpation of authority under Article 177 of the Revised Penal Code.

Last year, Solicitor General Jose Calida supported the VACC petition and asked the Supreme Court to order the Office of the Ombudsman to file 44 counts of reckless imprudence resulting in homicide against Aquino, Purisima and Napeñas. /gsg