US, China begin new round of tariff war negotiations

BEIJING- American and Chinese trade negotiators began more talks Wednesday aimed at ending a tariff war after Treasury Secretary Steven Mnuchin said U.S. officials might be moving toward a decision on whether to make a deal with Beijing.

No agreements have been announced but both governments say they are making progress. That has helped to reassure jittery global financial markets.

Washington is pressing Beijing to roll back industry development plans it says are based in part on stolen technology and that violate its market-opening commitments. 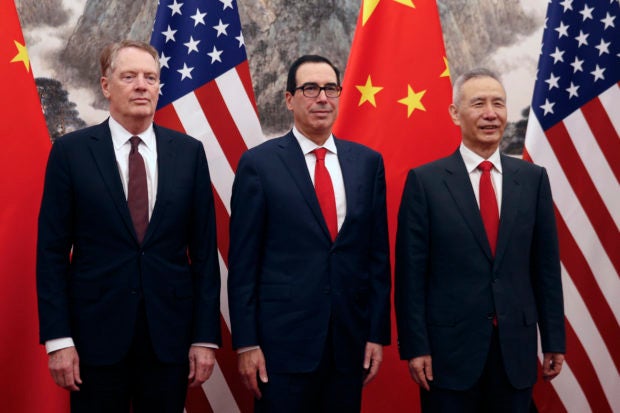 Mnuchin said Tuesday he hoped for “substantial progress” in talks this week.

The secretary said earlier this week’s meeting at a Chinese government guesthouse and another round of talks next week in Washington would help American officials decide whether to recommend President Donald Trump agree to a deal with Beijing.

The U.S. delegation is led by Mnuchin and Trade Representative Robert Lighthizer.

The Chinese side is led by the country’s economic czar, Vice Premier Liu He.

Beijing retaliated by imposing penalties on $110 billion of U.S. goods.

The negotiators are still discussing how to ensure that Beijing would adhere to whatever commitments it makes, and whether the Trump administration would keep tariffs on Chinese imports to maintain leverage over Beijing.

U.S. officials and businesses assert that China has failed to keep past promises concerning its trade practices.

Critics worry any agreement might hurt other countries by shifting Chinese demand away from them.

They also worry it might marginalize the World Trade Organization, which is meant to enforce free trade rules for everybody. /gsg

Read Next
Taliban: Fresh round of talks with US peace envoy starting
EDITORS' PICK
Cusi: PDP-Laban convincing Duterte to run for senator in 2022 polls
Work-From-Home is here to stay and requires reliable logistics
Court of Appeals junks Mandaluyong’s ‘riding-in-tandem’ ordinance
Legarda emphasizes role of ICC/IPs in nation building this IP month
Jordan Clarkson hits 8,000 career points, faces Jalen Green next
Climate Change Commission and Nestlé PH to discover sustainability-focused solutions
MOST READ
Don’t do that: Robredo to supporters calling to boycott restos supportive of Marcos
Marcos Jr’s ‘special diploma’ from Oxford: You can have it, too
Bongbong Marcos camp eyeing Pacquiao, VisMin bets as VP options — Imee
OVP spox to Imee Marcos: Robredo is an extraordinary lawyer
Don't miss out on the latest news and information.