Representing the country in a 10-day thrilling hike to Everest, a Filipina mountaineer took pride as she raised the Philippine flag in a red terno at the mountain’s base camp.

The terno — which emerged from the national costume of the Philippines, the baro’t saya — is a common formal dress worn by Filipino women.

Amaryllis Bianca Lawas, an adventurer from Malate, Manila, shared her inspiring photo on Facebook last April 28, and wrote, “Representing the Philippines [at the] Everest base camp in my red Filipiniana gown.”

Lawas also mentioned in her post that changing her clothes into a Filipiniana national costume outdoors while snowing at 5,364 meters (17,598 feet) above sea level and a -15 degree celsius was no joke at all.

She was then praised by netizens who congratulated her for her impressive patriotism.

Lawas has been traveling since 2000 when she was still a student, and later on discovered her interest in mountain climbing in 2010.

“I joined different groups, but I used to be with my group of hikers and traveler friends called “Storm Chasers,” Lawas told INQUIRER.net in an exclusive interview.

When her group became a bit inactive, Bianca started joining major and difficult hikes locally with another group of friends called “Lakwatseros.”

Among the mountains they were able to hike were Mt. Apo, Mt. Halcon, and Mt. Guiting-Guiting, to name a few. These hikes also served as their training for the Everest base camp trek.

As for international hikes, Lawas used to join her friends from BSP Mountaineering Club during a hike in Mt. Kinabalu in Malaysia and Mt. Fuji in Japan.

Last April 12, Friday, was her first ultimate climbing adventure in Nepal’s Mt. Everest, which is known as the world’s highest mountain with a peak of 8,850 meters (29,035 feet) above sea level. There were six of them in the group. 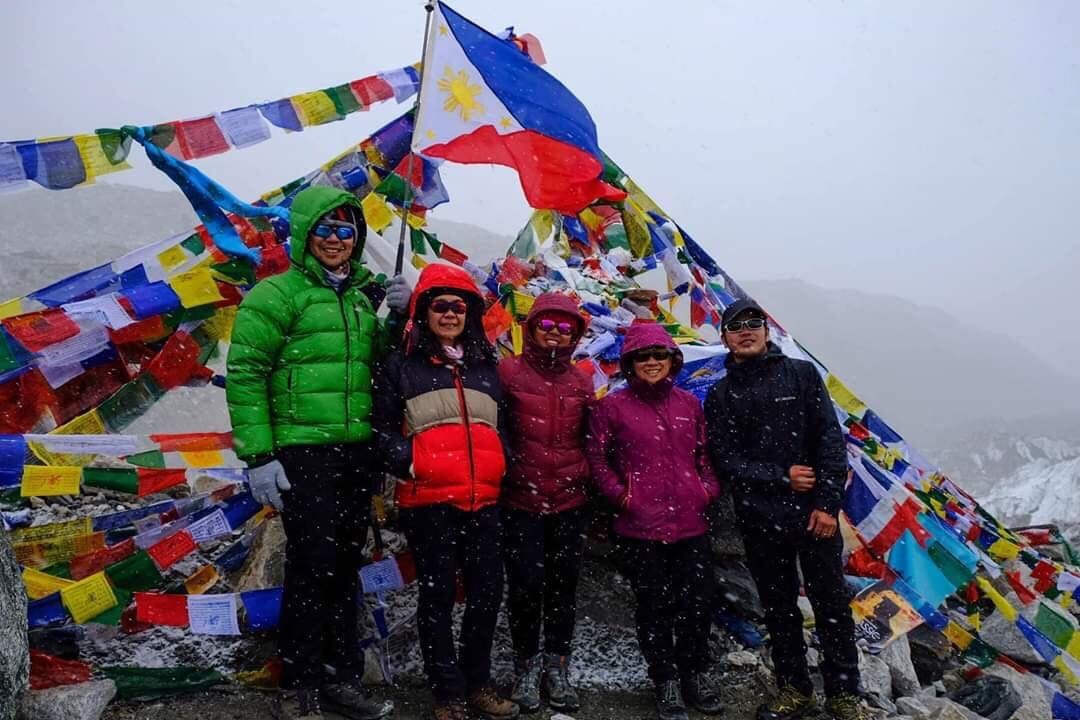 “We had a short layover flight in Kuala Lumpur and arrived in Kathmandu on April 13, 2019. Sir Miguel Mapalad of Yabag Mountaineering was there for us at the start, but he had to go back to the Philippines before our flight to Lukla for his local project,” Lawas said.

They climbed the mountain in ten days, for 6 to 8 hours per day, excluding the four-hour hike required for acclimatization. During the process of acclimatization, their team hiked to a higher altitude and slept in a lower one to be able to adapt to the environment and to its altitude.

The process is said to be of the utmost importance so that hikers will not suffer from medical conditions brought by high altitude sickness.

Throughout a 10-day grueling hike, Lawas was able to climb up to the Everest base camp where the trek was only intended to, and did not go on through the summit.

“I feel accomplished and great whenever I reach the summit of mountains most especially the difficult ones,” she told INQUIRER.net.

She admitted that there were times when she wanted to give up in the middle of the hike, and worse, she doubted the possibility of reaching her destination – just like what happened to her on her sixth day in the Everest base camp trek.

“I was so exhausted at the end of my [sixth] day because of the altitude. We were just walking on a flat surface, but I was walking very slowly even if I wanted to walk a bit faster,” she said.

Despite feeling heavy when she slept at night, Lawas said she was able to rest well and regain her energy to continue with the trek the next day.

Raising the flag in a fiery, Filipiniana dress

Lawas’ red terno dress was conceptualized by her, and was sewn by a local designer in Manila.

She really planned on changing her clothes into a red Filipiniana gown when she reaches the Everest base camp. But prior to that, she imposed some conditions on herself, such as she will not change her clothes if it is raining or snowing to avoid getting hypothermia.

“Yet when I was [already] there, it was snowing,” Lawas said. “Then, I told myself, sayang naman [ang] pagdadala ko ng gown [kung hindi ko gagamitin]?” (It would be a waste to have brought the gown if I will not wear it.).

Trusting that she can tolerate the cold, she ate her words and quickly put on her red Filipiniana gown.

As Lawas raised and waved the Philippine flag at the Everest base camp in her Filipiniana gown, foreigner hikers looked up to her and said, “Look, it’s Ms. Philippines!” JB

Drunk man loses way to hotel, hikes up a mountain by accident