newsinfo / Metro
Metro
ENHANCED BENEFITS FOR THOSE WITH KIDNEY AILMENTS 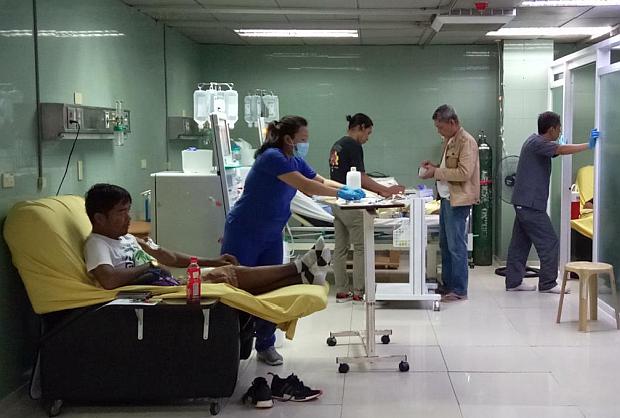 Last year, the city government signed partnership agreements that allow Makati residents with Yellow Cards to receive dialysis treatments in private freestanding dialysis centers in Makati and other nearby locations. The city government shoulders much of the cost of these sessions. (Photo from the Office of Mayor Abby Binay)

Last year, the city government signed partnership agreements that allow Makati residents with Yellow Cards to receive dialysis treatments in private freestanding dialysis centers in Makati and other nearby locations. The city government shoulders the cost of these sessions.

“We have allotted a P4,500-subsidy for each dialysis session of qualified patients to cover costs in excess of the current PhilHealth coverage. Through the Yellow Card, Makatizens with impaired kidney functions now have unhampered access to timely and adequate treatment,” Binay said.

The Yellow Card extends to cardholders a full range of medical benefits, from subsidized hospitalization to dialysis treatments.

Previously, the Yellow Card covered up to 10 dialysis sessions only, in addition to the current maximum PhilHealth coverage per patient of 90 sessions per year at P2,500 per session.

“Our patients now have access to alternative service providers outside the Ospital ng Makati, and they need not worry about out-of-pocket expenses anymore,” Binay said.

According to hospital records, there were 223 qualified patients last year who were able to avail themselves of the outsourced services as of end-December, for which the city paid around P38.8 million.

Moreover, under the current program guidelines, should the total bill for a session exceed P5,000, dialysis patients will only pay a flat rate of P500. For example, if the total bill reaches P7,000, the patient will need to pay P500 only, while the city will shoulder P6,500.

The amount is estimated to cover around 26,750 sessions with basic dialysis package and provisions for additional supplies and services.

Binay said there were around 80 patients being served at the OsMak hemodialysis unit, while around 250 patients had availed themselves of the outsourced services.

Patients with kidney disease usually need to undergo two to three hemodialysis treatments a week, depending on the severity of their condition. The cost per session also varies, as there may be additional laboratory fees and other charges.

The enhanced benefits for dialysis patients are part of the expanded health services program that Mayor Abby has vowed to pursue. These include a palliative and hospice care program under Ospital ng Makati for the benefit of residents with chronic and life-threatening illnesses, and in support of their family members, too.

Another new initiative is the establishment of Urgent Care in the city’s barangay health centers to provide immediate relief to injuries or other health conditions requiring immediate care, but not serious enough to require treatment in an emergency room (ER).

Binay also assured residents of her commitment to the continued modernization of OsMak with the addition of modern equipment and facilities, more doctors, nurses and hospital staff, among others.

Meanwhile, the city government continues its promotion of universal health insurance coverage through the sponsored PhilHealth ng Masa program. Based on the records of the Makati Social Welfare Department, the program to date has 3,811 new enrollees and 17,377 renewals, for a total of 21,188 members.