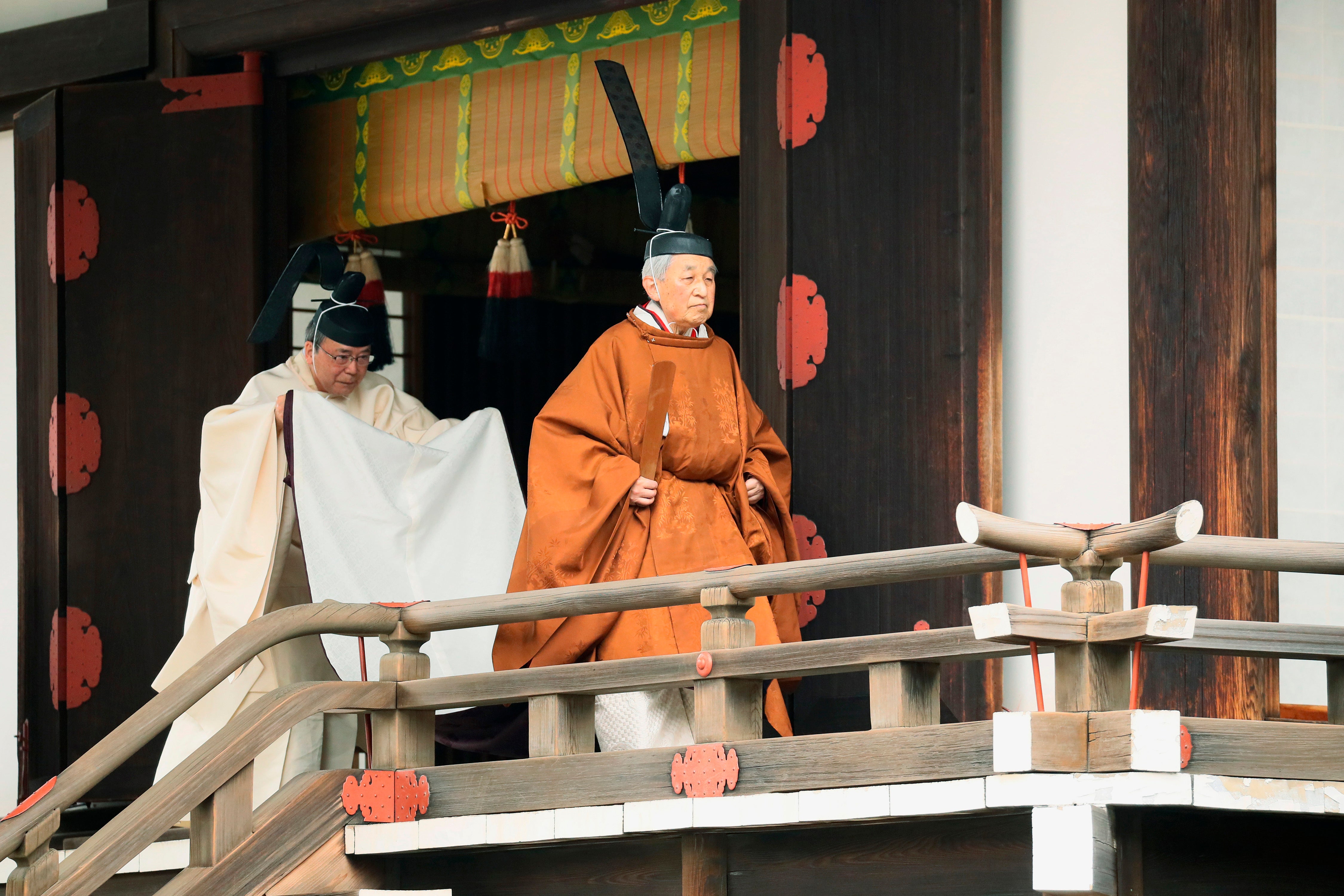 Japan’s Emperor Akihito, right, leaves after a ritual to report his abdication to the throne, at the Imperial Palace in Tokyo, Tuesday, April 30, 2019. The 85-year-old Akihito ends his three-decade reign on Tuesday when he abdicates to his son Crown Prince Naruhito. (Japan Pool via AP)

TOKYO — Emperor Akihito began his abdication rituals at a Shinto shrine Tuesday morning as Japan embraces the end of his reign with reminiscence and hope for a new era.

Television images showed Akihito in a traditional robe entering the main Shrine of Kashikodokoro to report his retirement to the gods. The shrine is where the goddess Amaterasu, said to be the direct ancestress of the imperial family, is enshrined. Only part of Akihito’s shrine ritual was released to the public.

In a palace ceremony later in the day, Akihito will announce his retirement before other members of the royal family and top government officials.

His reign runs through midnight when his son Crown Prince Naruhito becomes new emperor and his era begins.

Naruhito will ascend the Chrysanthemum throne on Wednesday. In a separate ceremony, he will inherit the Imperial regalia of sword and jewel, as well as Imperial seals as proof of his succession as the nation’s 126th emperor in the world’s oldest hereditary monarchy from the 5th century.

Hours before the abdication ceremony, many people were gathering outside the palace compound despite unseasonably wet and cold weather, and even though they are not allowed to look inside.

“We came because today is the last day of (the emperor’s era of) Heisei, and we feel nostalgic,” said Akemi Yamauchi, 55, standing outside the palace with her husband.

“We like the current emperor. He has worked hard for the people, he is very thoughtful, and kind to everyone,” said her husband, Kaname. The couple came from Kyoto, Japan’s ancient capital where emperors lived until about 150 years ago.

President Donald Trump, in a message to Akihito, expressed “appreciation” for his contribution to the two countries’ close relations. Trump had a courtesy meeting with Akihito during his 2017 Japan visit and will be the first foreign leader in May to meet the new emperor.

Japanese television talk shows are displaying a countdown to the midnight transition, and programming was dominated by the abdication and looking back to major events of Akihito’s era that included the 2011 tsunami, another deadly earthquake in Kobe in 1995 and the Tokyo subway nerve gas attack that shook Japan’s sense of safety and confidence.

Security was extremely tight around the palace and across downtown Tokyo with thousands of police mobilized. Police had arrested a man Monday night on suspicion of placing a pair of kitchen knives last week on the school desk used by Akihito’s grandson. 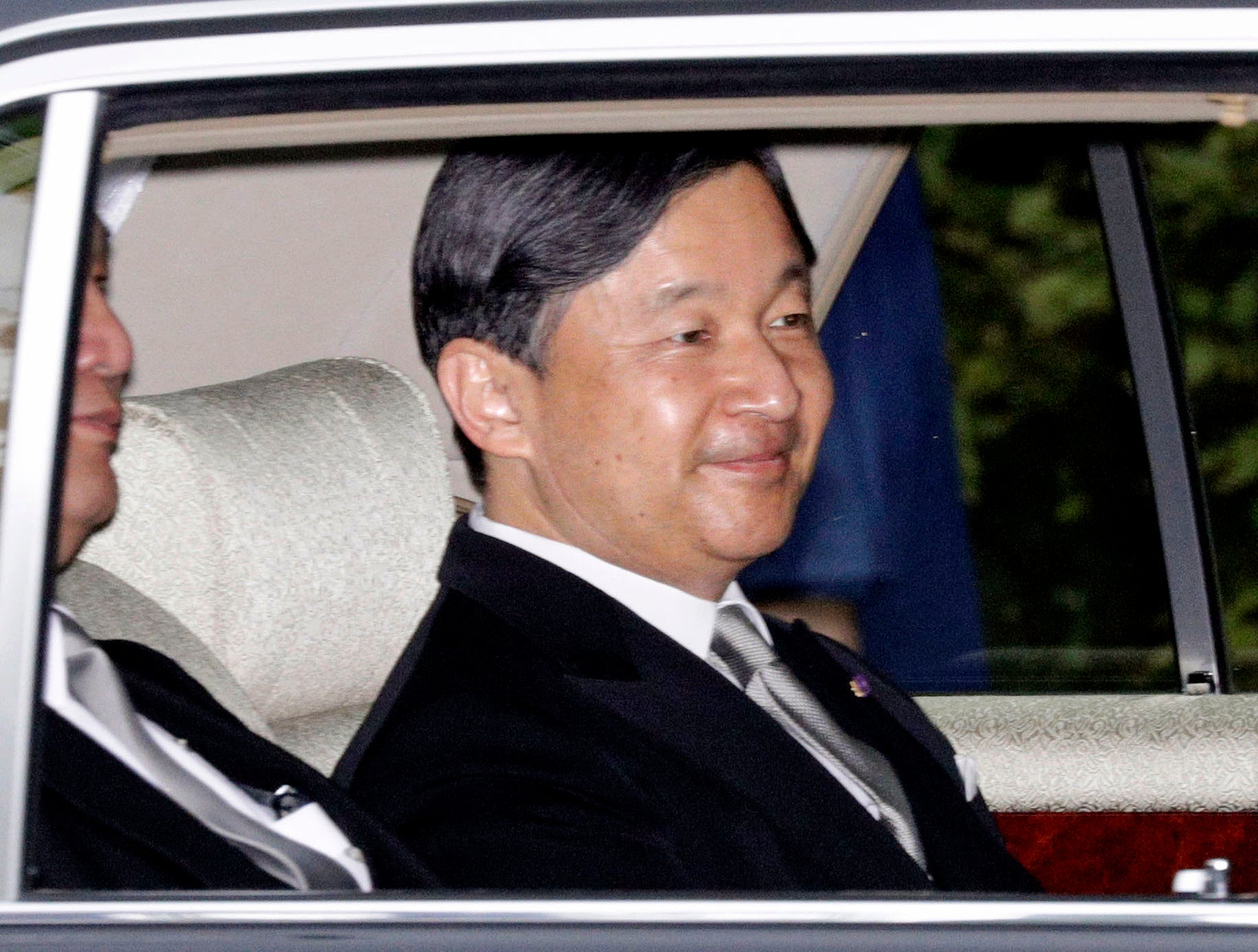 Akihito, 85, took the throne in 1989 and devoted his career to making amends for a war fought in his father’s name while bringing the aloof monarchy closer to the people.

With his commoner-born wife, Empress Michiko, he reached out to the people, especially those who faced handicaps and discrimination, as well as those hit by disasters, illuminating the hardships of people often overlooked by society. Akihito was the first emperor to marry a commoner, one of many changes he brought to the palace. The couple also chose to raise their three children instead of relying on palace staff, and decided to be cremated upon their deaths in a smaller tomb side by side, also a tradition-breaking step.

“You can say that over the past three decades, Akihito has been Japan’s chief emissary of reconciliation,” said Jeff Kingston, Asian studies director at Temple University, Japan Campus. “In bringing Japan close to the people, he has also acted as consoler in chief … and he has also been a strong advocate of the vulnerable and the marginalized in the Japanese society.”

“I think the people really warmed to him and felt that the monarchy was relevant to their lives because of these efforts by Akihito. He invented these roles and was really remarkable that he was able to stretch these envelopes that far” despite the tight controls by the Imperial Household Agency, Kingston said.

Akihito’s efforts won him widespread respect, and recent media surveys have shown public support for the imperial family at 80 percent, the highest ever for the institution.

Such respect did not come overnight. Akihito grew up during World War II and was 11 when his father Hirohito announced the end of the war on radio. Akihito embraced his role as peacemaker and often represented his father on reconciliatory missions as young crown prince, decades before he became the emperor himself.

He is the first emperor in Japan’s modern history whose era did not have a war. Though he has avoided outright apologies, he has stepped up his expressions of regret in carefully scripted statements on the war.

Akihito visited China in 1992 and offered what was considered the strongest expression of regret over the war. He has also visited the Philippines and other Pacific islands conquered by Japan that were devastated in fierce fighting as the U.S.-led allies took them back.

Akihito will be known as the emperor emeritus and will no longer have official duties after he abdicates. He won’t even attend his son’s succession rituals so as not to interfere with the serving emperor.

Akihito is expected to enjoy his retirement, going to museums and concerts, or spending time on his goby research at a seaside Imperial villa. Akihito and Michiko will move to a temporary royal residence before eventually switching places with Naruhito. /kga