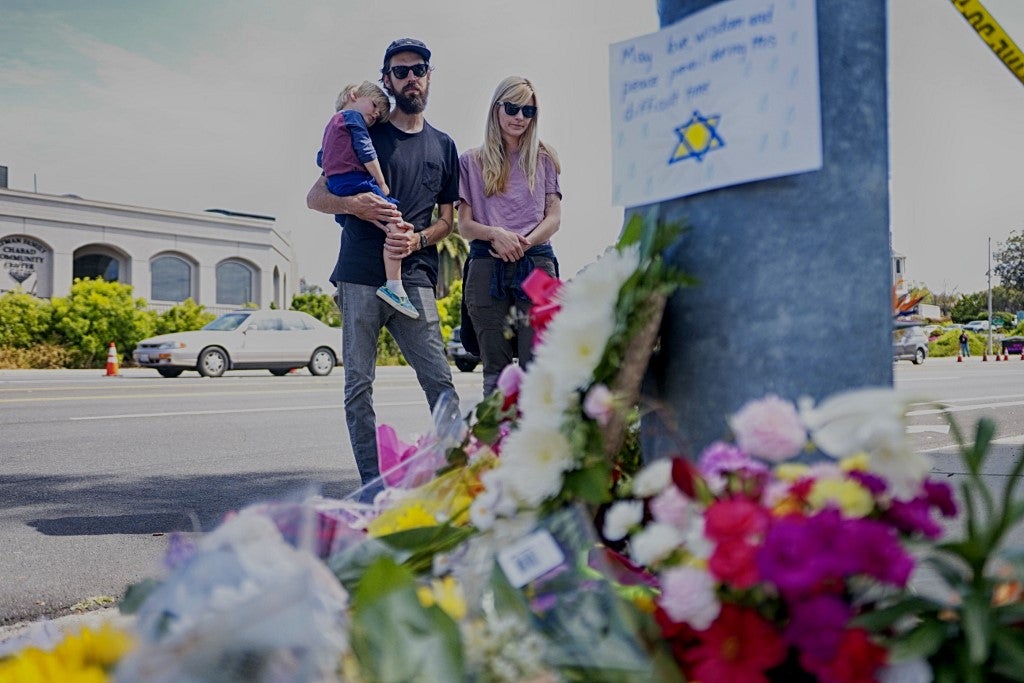 Mourners Troy and Katie McKinney and their son Wynn look over a makeshift memorial across the street from the Chabad of Poway Synagogue on Sunday, April 28, 2019, in Poway, California, one day after a teenage gunman opened fire, killing one person and injuring three others including the rabbi as worshippers marked the final day of Passover, authorities said. The shooting came exactly six months after a white supremacist killed 11 people at Pittsburgh’s Tree of Life synagogue — the deadliest attack on the Jewish community in US history. AFP

POWAY, United States – A rabbi who carried on preaching despite being wounded in the latest deadly shooting at a US synagogue said Sunday that Jews would not be intimidated by the “senseless hate” of anti-Semitism.

A 60-year-old woman, Lori Kaye, was killed and three people were wounded when a gunman burst into the synagogue in the southern Californian town of Poway on Saturday and opened fire on the final day of Passover.

Police identified the shooter as John Earnest, 19, who had posted angry anti-Jewish remarks online just before the shooting and claimed he was behind the arson of an area mosque weeks earlier.

According to San Diego County Sheriff’s Department records, Earnest faces one charge of murder and three of attempted murder, and will appear before a judge to be formally indicted on May 1.

Coming six months to the day after a white supremacist shot dead 11 people at a Pittsburgh synagogue, it raised new questions about a nationwide rise in anti-Semitism and in hate crimes generally — and about President Donald Trump’s often controversial response to them.

Ahead of the funeral for Kaye, one of her oldest friends said her killing must serve as a wake-up call while the synagogue’s rabbi said authorities had to do more to protect places of worship.

“Terror will not win. As Americans we cannot cower in the face of the senseless hate that is in anti-Semitism,” Rabbi Yisroel Goldstein said in an interview to NBC television from his hospital bed.

The rabbi suffered serious injuries to his hand when the gunman blasted him at short range in the middle of his sermon before aiming at Kaye.

As the gunman then fled, Goldstein led his congregation outside and continued preaching until the emergency services arrived.

“I got up there and just spoke from my heart, giving everyone the courage,” he said.

“It was just 70 years ago during the Holocaust we were gunned down like this and I just want to let our fellow Americans know that we are not going to let this happen here.

“It’s going to be a scar for the rest of my life — both to remind us about literally how vulnerable we are but also how brave we need to be.”

Mourners and well-wishers left flowers and notes of condolence and solidarity at a makeshift memorial across the road Sunday, with a second candlelight vigil planned for the evening.

Trump said the nation stood in solidarity with the Jewish community, telling a rally on Saturday that the “evil of anti-Semitism and hate” must be overcome.

But the shooting came only days after former US vice president Joe Biden highlighted Trump’s 2017 remarks about the neo-Nazi march in Charlottesville, Virginia that left a counter-protester dead.

Videos showed some torch-bearing neo-Nazi protesters chanting “Jews will not replace us” as they marched in Charlottesville.

Trump at the time said that “there were very fine people on both sides” of the protest which was against the removal of a Confederate-era statue.

But after Biden on Thursday brought up those words in announcing his candidacy for the presidency, Trump doubled down, saying he had phrased his 2017 remarks “perfectly.”

Human rights groups say recent years have seen the biggest rise in anti-Semitic incidents in decades while some critics say Trump’s rhetoric has played a part.

Trump has forged an exceptionally close relationship to Israel and its current prime minister, Benjamin Netanyahu while his daughter Ivanka and son-in-law Jared Kushner are Jewish.

But critics blame him for stoking racial hatreds with comments about Muslims and Latin migrants that some white nationalists have taken as confirming their position.

Roneet Lev, who had known Kaye for decades, said her death should ring alarm bells.

“She died advertising the problem we have with anti-Semitism and to bring good to this world,” Lev told CNN.

Two Israelis were among the wounded, an eight-year-old girl and her 31-year-old uncle who were originally from Sderot, a town bordering the Gaza Strip that it is a frequent target of rocket attacks by Palestinian militants. Both were said to be in good condition.

Prime Minister Netanyahu condemned the shooting as “atrocious,” adding that “the international community must step up the struggle against anti-Semitism.” /cbb