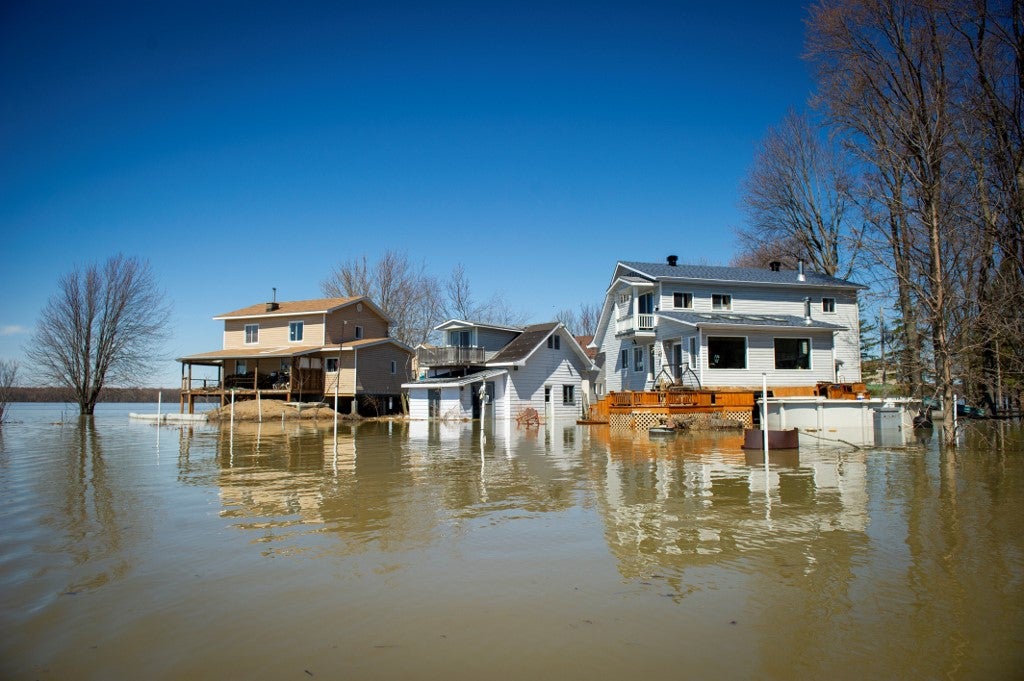 Floods in progress at Rigaud in the suburbs of Montreal, Quebec, Canada, on Monday, April 22, 2019. Flooding in eastern Canada has forced the evacuation of 1,200 people while more than 600 troops have been deployed in response, authorities said Sunday, April 21, 2019. Warming weather over the Easter weekend has brought spring floods due to heavy rain and snowmelt from Ontario to southern Quebec and New Brunswick. AFP

MONTREAL, Canada – Over 6,500 people were told to quickly leave their homes near Montreal late Saturday and early Sunday after floodwaters breached a dike in rain-soaked eastern Canada.

The flooding across Ontario, Quebec and New Brunswick “highlights how important it is that we fight climate change, that we adapt and mitigate the impacts of more extreme weather events,” he said.

According to the latest government data, nearly 8,000 people have been forced from their homes in Quebec — more than in 2017, during what was then the area’s worst flooding in half a century.

The barrier protecting Sainte-Marthe-sur-le-Lac, just west of Montreal, gave way Saturday night, causing a surge of water of up to 1.5 meters (five feet) to crash through the area.

“We didn’t have time to do anything, the water rose while were chatting, I just had time to take my medication,” one resident told public broadcaster Radio-Canada.

“It’s going very well. Thankfully no one was injured, no one is missing,” Sergeant Daniel Thibodeau said.

Around 1,700 soldiers have been deployed to the hardest-hit regions — and Montreal and Ottawa declared states of emergency last week.

In Fredericton, New Brunswick, crews have been busy hauling away driftwood and debris as waters start to recede. More than 400 households were flooded in the province, and the main highway connecting to the rest of Canada remained closed.

In Ottawa, a bridge connecting the capital to Gatineau, Quebec was closed and 18 residents fled their flooded homes.

Trudeau was in the Ottawa area on Saturday for a briefing from emergency management officials — where he helped to fill sandbags with his young son. /cbb