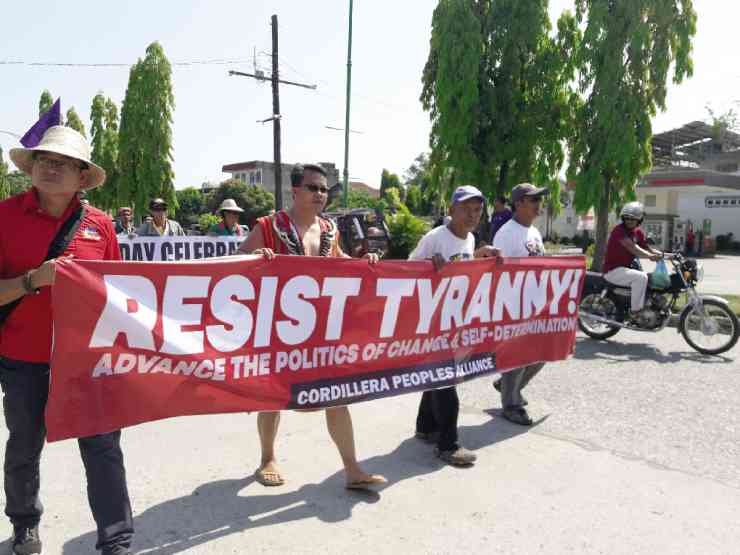 TABUK CITY, Philippines — More than 1,000 protesters from as far as Mindanao used the celebration of Cordillera Day here on Wednesday to drum up issues confronting indigenous peoples (IPs).

“Cordillera Day celebration is a testament of the resolute and steadfast struggle of the Cordillera people for self-determination and national democracy,” said Windel Bolinget, chair of the militant Cordillera Peoples Alliance.

The protesters beat their gongs as they gathered in front of the city hall here.

Bolinget said their protest aimed to recognize their ancestors’ victory in defending their homeland against the Chico River dam project during the martial law regime of Ferdinand Marcos in the late 1970s.

On April 24, 1980, Army soldiers murdered Macliing Dulag, a Kalinga “pangat” (elder) who was among the leaders opposing the project.

“Dulag’s murder was meant to silence the opposition but it failed,” Bolinget said, adding that his death “only fueled the indigenous peoples’ courageous defense of their ancestral land.”

He said their struggles as part of an indigenous community continue until now.

Cordillera IPs in Hong Kong celebrated earlier on April 21. Those in Apayao, Mountain Province and Ifugao were scheduled to have their celebrations on April 27.

According to Bolinget, the threats to the Cordillera homeland remain as the government regards the region as a resource base.

He said Kalinga is now faced with the ongoing construction of the Chico River pump irrigation project that is funded by a China loan.

He said the project was started even before consultations on the free prior and informed consent from the IPs were completed.

There are also hydropower and geothermal projects awarded to foreign and local corporations that will tap the natural resources of Kalinga, he said. —Kimberlie Quitasol