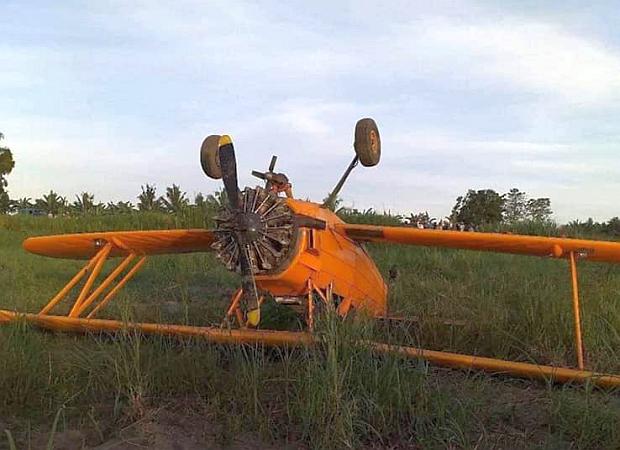 SULTAN KUDARAT – A pilot survived the crash of a chemical spray plane he flying in Lambayong, Sultan Kudarat Saturday dawn. It was the second spray plane to crash in the same town in 12 days, police said.

Arquiza was on spraying flight when his plane crashed at 5:30 a.m. at the Delinanas Development Corp. banana plantation in Barangay Reneben, Lambayong, Sultan Kudarat.

“Our investigation showed it could be due to mechanical problem,” Luna told the INQUIRER. “It was spraying chemicals over the Delinanas plantation when it crashed and ended upside down in an open field.”

Arquiza, a 28-year-old resident of Davao City, was unscathed in the incident, he said.

It was Arquiza’s third trip of spraying mission over the Delinanas plantation when the mishap happened, Luna said.

Luna said his office was coordinating with the Civil Aviation Authority of the Philippines (CAAP) to determine if the spray planes of Davao-based firms were still air worthy following two crashes in 12 days.

On April 15, a pilot of a spray plane owned by Davao City-based Air Works Corp., piloted by Edcel Luciano, was on a spraying sortie at the Delinanas banana plantation in Datu Abdullah Sangki, Maguindanao, when it crashed at 5:15 a.m. in Barangay Sigayan, also in Lambayong town.

Arnel Monaya Antolo, manager of Air Works, which is based in Lambayong, Sultan Kudarat, said the plane took off at about 5:10 a.m. and headed for Datu Abdullah Sangki but failed to sustain its climb.

Quoting witnesses on the ground, Luna said the plane suddenly caught fire on impact, but pilot Luciano managed to get out and was rescued by local residents.

The resident rushed Luciano to Evangelista Medical Clinic and Hospital in Lambayong and was eventually airlifted by Air Works to Davao Doctors Hospital for further medical attention.

“Our investigation showed that the plane suddenly lost power and crash-landed in Barangay Sigayan,” Luna said of the April 15 incident.

While the pilot in the Sultan Kudarat crash survived, the pilot in another spray plane crash, which also took place on Saturday, in Carmen town in Davao del Norte failed to make it.

Jessie Kevin Lagapa, 25, of Lapu-Lapu City, Cebu, died of injuries he sustained after the light plane he was flying plunged into a ricefield at Purok 1, Barangay Mangalcal at around 6:45 a.m. on Saturday, April 27, according to Maj. Jason Baria, spokesperson of the Southern Mindanao Police Regional Office.

Investigation revealed that Lagapa’s plane, which was operated by another Davao-based company, Davao Aerowurkz Corp. with tail number RP-R5388, was flying low over Mangalcal when it nosedived and hit a power pylon of the National Grid Corporation of the Philippines before going down on a ricefield.

Responding firefighters and rescuers pulled Lagapa out of the wreckage and rushed him to the Carmen District Hospital where he was declared dead on arrival.

Accidents involving light spray planes are common in Southern Mindanao where aging crop dusters are used to apply pesticides to most of the region’s more than 30,000 hectares of plantations of export-grade bananas.