CEBU CITY – At least 90 houses were destroyed by a fire that broke out at the port area here Friday afternoon.

An initial report from the Cebu City fire department stated that the fire started at 4:50 p.m. in the interior portion of Sitio Silangan 2, Barangay Tejero. 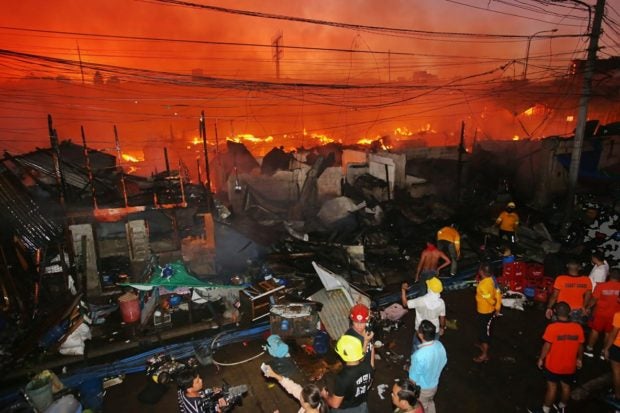 It took the firemen more than one hour to put the blaze under control after it broke out past 4 p.m. in Barangay Tejero, Cebu City. photo by Junjie Mendoza, Inquirer Visayas

The blaze quickly spread to nearby houses which were made of easily-combustible materials.

Responding firefighters managed to prevent the conflagration from spreading to the warehouses at Piers 3 and 4.

The individuals were injured while trying to secure their belongings.

The fire was placed under control at 6 p.m. but has yet to be fully extinguished as of 8p.m. / gsg