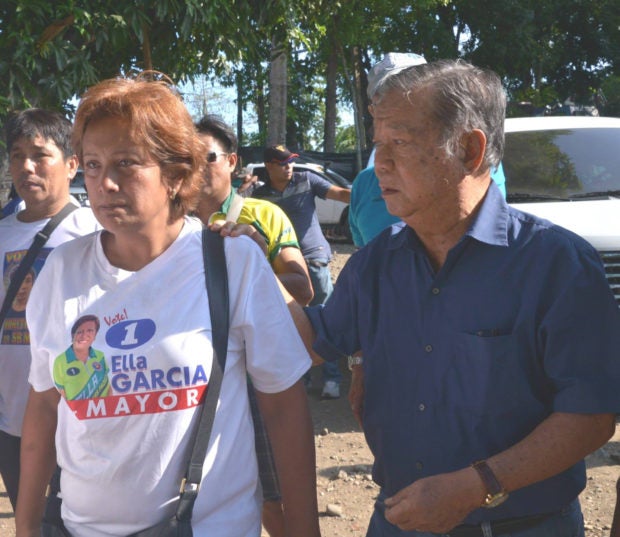 BACOLOD CITY, Philippines — Two local officials in Moises Padilla town in Negros Occidental were arrested for their alleged involvement in the ambush of a councilor and his uncle on Thursday.

Two counts of murder will be filed against Councilor Agustin Grande of Moises Padilla town and Joe Cesar, a member of the Barangay Peacekeeping Action Team, according to Police Capt. Junji Liba, Moises Padilla police chief.

He said Grande had denied any involvement in the killing of reelectionist Moises Padilla Councilor Michael Garcia and his uncle, Mark Garcia.

The two were arrested in their homes after witnesses claimed they were among those who ambushed the convoy of the Garcias who just came from a campaign sortie.

In the convoy was Moises Padilla Vice Mayor Ella Garcia-Yulo, sister of Mark, but was not hurt.

Yulo is running for mayor against the incumbent, Mayor Magdaleno Peña, under the National Unity Party (NUP). She said she believes she was the target of the ambush.

While their group was campaigning in Barangay Inolingan, she said they decided to leave after they saw men wearing dark vests inside a pickup truck.

She said was saved only because Mark and Michael told her to run and they took the bullets.

“They finished [them] off with bullets to their heads,” she said.

Police Col. Romeo Baleros, acting chief of the Negros Occidental Police Provincial Office, said 30 people took part in the ambush, seven of whom had been identified while two were arrested – Grande and Cesar.

“They were positively identified by the wife of Mark Garcia,” Baleros said.

The suspects were believed to be part of a private armed group linked to a local official, whose name was withheld by the authorities.

Negros Occidental officials have offered a P2 million bounty for information that would lead to the arrest of the suspects. The P1 million came from 3rd district Rep. Alfredo Abelardo Benitez of Negros Occidental and Vice Gov. Eugenio Jose Lacson.

The other half was offered by Negros Occidental Governor Alfredo Marañon Jr. and Jeffrey Ferrer, head of the NUP and former 4th district congressman who is now running unopposed for vice governor.

Marañon has filed a formal request to the Commission on Elections (Comelec) to place Moises Padilla under its control to restore peace and order during the election period.

Comelec Commissioner Rowena Guanzon condemned the killing and said the Philippine National Police and the Armed Forces of the Philippines will assess the situation in the town if there is a need to place it under Comelec control.

Once there is a recommendation from the PNP and the AFP, the Comelec would decide on it, she added.

Marañon and Ferrer said the people of Moises Padilla knew who was behind the ambush of the Garcias and should let their voices be heard on May 13.

Ferrer called the killings barbaric work of the devil.

Marañon said the people of Moises Padilla should wake up and put an end to what is happening in their town by voting on May 13.

“The killings were politically motivated because they know Ella will win,” he said. “The perpetrators were organized and armed with high powered weapons.”

Yulo, for her part, has appealed to President Rodrigo Duterte for help in ensuring that justice is served to her brother and nephew.

Read Next
Boracay bounces back, focus on sustainable tourism on
EDITORS' PICK
Countries with confirmed cases of coronavirus
FlipTop rapper Loonie freed on bail
SM continues to send relief assistance to remote towns in Batangas
Get exciting deals and discounts when you download the new McDonald’s App
China expands lockdown against virus, fast-tracks hospital
‘A greener, cleaner tomorrow’: A how-to guide for Filipinos who want to help with today’s energy crisis
MOST READ
Megan Young, Mikael Daez get married
Taal’s sulfur dioxide emission increases
No time for revelry; Tagaytay instead plans for alert level 5
Body parts found in suitcase in Bulacan
Don't miss out on the latest news and information.