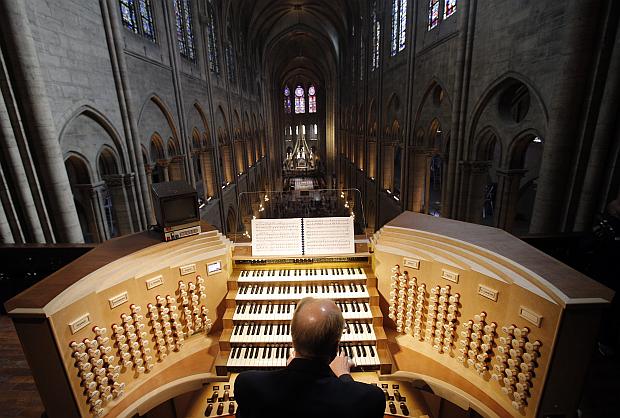 In this photo, taken Thursday, May 2, 2013, Philippe Lefebvre, 64, plays the organ at Notre Dame cathedral in Paris. (Photo by CHRISTOPHE ENA / AP)

PARIS — France’s government has presented a bill aimed at speeding up the reconstruction of Notre Dame Cathedral and providing transparency on how huge amounts of donation money for the restoration will be spent.

The bill detailed Wednesday in a weekly Cabinet meeting will allow the government to pass emergency orders regarding Notre Dame and to skip some ordinary renovation procedures. France has very strict, long processes when it comes to renovations of historic monuments.

Still, the measure is sensitive, since some architects and heritage experts have expressed concerns about the quality of the work to be done on the cathedral.

French President Emmanuel Macron has set a goal of rebuilding the cathedral in just five years — which some experts consider simply impossible to reach.

The Notre Dame reconstruction is prompting widespread debate across France, with differing views over whether it should involve new technologies and designs. 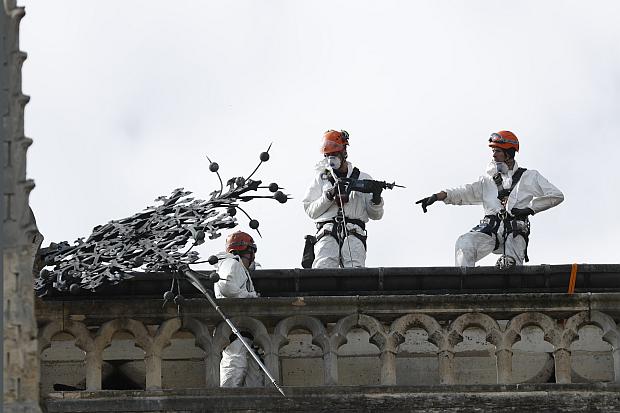 Workers stand on a roof of Notre Dame cathedral Wednesday, April 24, 2019 in Paris. Professional mountain climbers were hired to install synthetic, waterproof tarps over the gutted, exposed exterior of Notre Dame Cathedral, as authorities raced to prevent further damage ahead of storms that are rolling in toward Paris. (Photo by THIBAULT CAMUS / AP)

The bill also gives a legal framework for the national funding campaign that will help finance the reconstruction and should ensure transparency about how money will be used.

The bill will go to parliament in the coming weeks.

In other renovation news Wednesday, an expert said that Notre Dame’s massive 8,000-pipe organ has escaped undamaged from the flames that engulfed the building on April 15.

Pascal Quoirin, a specialist who restored Notre Dame’s organ in 2017, has checked the instrument and says it did not suffer any damage in the blaze that destroyed most of the cathedral’s roof.

“After two hours spent examining the instrumental part, I did not notice any damage that could have been caused by the fire,” he said.

According to Quoirin, the thermometer inside the organ showed that temperatures inside the instrument did not rise above 17°C (63°F) on the day of the fire, ensuring no damage to its electronic components or pipes.

Quoirin has recommended protecting the famous instrument with a waterproof case, dusting it and playing it regularly during the restoration work.

Bishop: Notre Dame will be closed up to 6 years