Bishop: Notre Dame will be closed up to 6 years

PARIS — The latest on the fire that tore through the Notre Dame Cathedral in Paris (all times local):

Notre Dame’s rector says he will close the burned-out Paris cathedral for up to six years.

Bishop Patrick Chauvet acknowledged that the famed monument would close down for “five to six years” as he spoke with local business owners Wednesday, two days after a blaze torched the roof of the cathedral and brought down its spire.

Chauvet said “a segment of the cathedral has been very weakened” by the devastating fire. He did not elaborate which section  he was talking about.

He added it was unclear what the church’s 67 employees would be doing in the future. 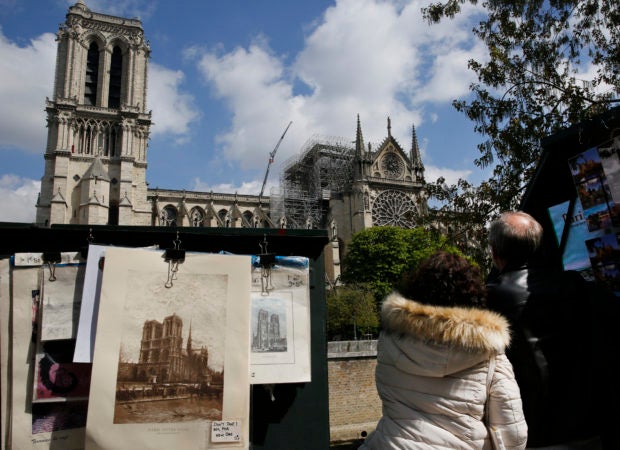 A couple view the damage to the Notre Dame cathedral from a print venders space on the Left Bank in Paris, Wednesday, April 17, 2019. Nearly $1 billion has already poured in from ordinary worshippers and high-powered magnates around the world to restore Notre Dame Cathedral in Paris after a massive fire. (AP Photo/Christophe Ena)

The French prime minister has announced an international architects’ competition to rebuild the spire of Notre Dame Cathedral.

Edouard Philippe is speaking following a special Cabinet meeting Wednesday held by French President Emmanuel Macron, focusing on the reconstruction of the cathedral.

Philippe said the competition aims at “giving Notre Dame a spire adapted to technologies and challenges of our times.”

He said authorities have no estimate yet of the total cost of the renovation work. Macron said Tuesday he wants the cathedral to be rebuilt in five years.

Philippe said: “This is obviously a huge challenge, a historic responsibility.”

The Paris prosecutor’s office says investigators looking into the causes of the Notre Dame fire have still not been able to look inside the cathedral, as it remains unsafe.

Investigators will continue with interviews Wednesday, saying the inquiry will go on until prosecutors uncover “the truth and identify the origin” of the blaze.

On Tuesday, investigators spoke with around 30 witnesses, including employees of companies involved in the church’s restoration and security personnel.

The Czech Philharmonic and other major Czech orchestras will join forces to play a fundraising concert to help restore Notre Dame Cathedral, heavily damaged by a devastating fire.

The Czech Philharmonic says the orchestras will perform Antonin Dvorak’s “Stabat Mater” in St. Vitus Cathedral, a Gothic masterpiece, in Prague on Tuesday.

The orchestras want to support France in renovating one of the most important religious buildings in Europe.

“Stabat Mater” is a key religious piece by Dvorak. The oratorio was said to be inspired by the death of his three children.

St Vitus is the biggest and most important Czech cathedral and the “Concert for Notre Dame” will be broadcast live by Czech public radio and television.

Pope Francis has told his weekly audience at St. Peter’s Square of his sadness over the fire at Notre Dame Cathedral, the seat of the Paris archdiocese.

The pope said Wednesday that “I take this opportunity to express to the Paris diocesan community, all Parisians and the entire French population my great affection and my closeness after the fire in Notre Dame Cathedral.”

Addressing those gathered, pope said, “I was very sad and I feel very close to all of you.”

He expressed “the gratitude of the whole church to those who did their utmost to save the Basilica, also risking their lives.”

The pope on Tuesday sent a telegram of condolences to Paris Archbishop Michel Aupetitand and phoned French President Emmanuel Macron to express his solidarity.

Nearly $1 billion has already poured in from ordinary worshippers and high-powered magnates around the world to restore Notre Dame Cathedral in Paris after a massive fire.

Construction teams brought in a huge crane and a delivery of planks of wood to the site Wednesday morning.

French President Emmanuel Macron ratcheted up the pressure by setting a five-year deadline to restore the 12th-century landmark. Macron is holding a special Cabinet meeting Wednesday dedicated to the Notre Dame disaster.

Contributors include Apple and magnates who own L’Oreal, Chanel and Dior, as well as Catholics and others from around France and the world.