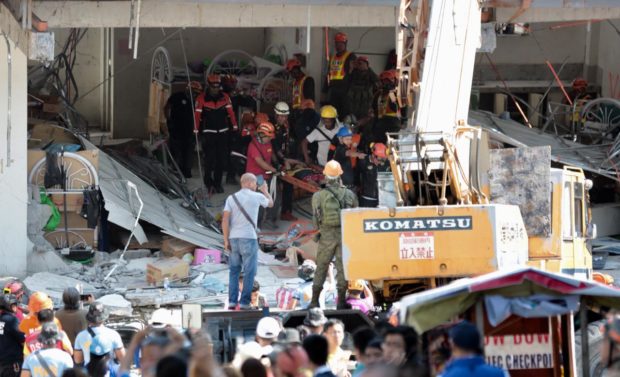 Rescuers pull out a male survivor out of the rubbles of Chuzon supermarket. INQUIRER / GRIG C. MONTEGRANDE

PAMPANGA, Philippines — Rescue operations at Chuzon supermarket in Porac town have been temporarily suspended to ensure the safety of rescuers, following a temblor that jolted this province early Wednesday morning.

As of this posting, nine bodies were already retrieved from the rubble of the supermarket that caved in immediately after the 6.1-magnitude earthquake that hit parts of Luzon on April 22.

Dela Cruz said rescue operations would continue once deployment among personnel has been fixed. He, nevertheless, noted that lifters, or the equipment that can carry heavy boulders, have been readied to aid in rescue efforts.