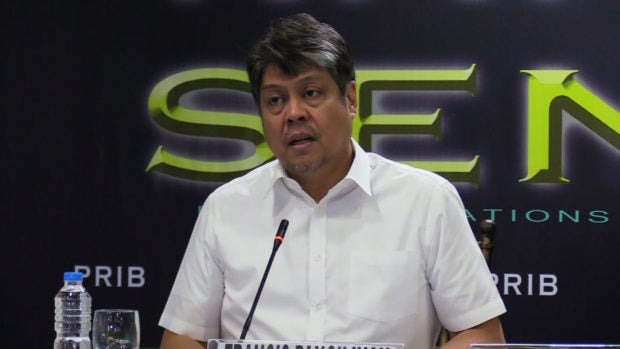 MANILA, Philippines — Senator Francis Pangilinan questioned on Tuesday the veracity of the latest alleged ouster plot against President Rodrigo Duterte after the opposition Liberal Party (LP) was not tagged as one of the usual suspects.

Pangilinan, president of LP, was among those tagged in last year’s alleged ouster plot dubbed as “Red October” led by communist rebels.

READ: ‘Red October,’ according to AFP

Asked over ABS-CBN News Channel on Tuesday about this new oust Duterte move, Pangilinan reminded the President’s own admission that three out of his five statements were not true.

Pangilinan then pointed out how the LP was linked in the “Red October” plot, which he said was meant to divert the public’s attention from the rice crisis then.

But in a budget hearing in the Senate last October, then Armed Forces of the Philippines (AFP) Chief of Staff General Carlito Galvez cleared Pangilinan and other opposition members from the ouster plot.

“Today, I read sa newspapers, the AFP is saying here’s no specific threat of an ouster of the President. So again you have the armed forces  saying one thing and intelligence reports saying another,” Pangilinan said in the television interview.

The senator then believed  that this new allegation of an ouster plot was  another diversionary tactic by the administration meant to sow fear to its critics. /jpv