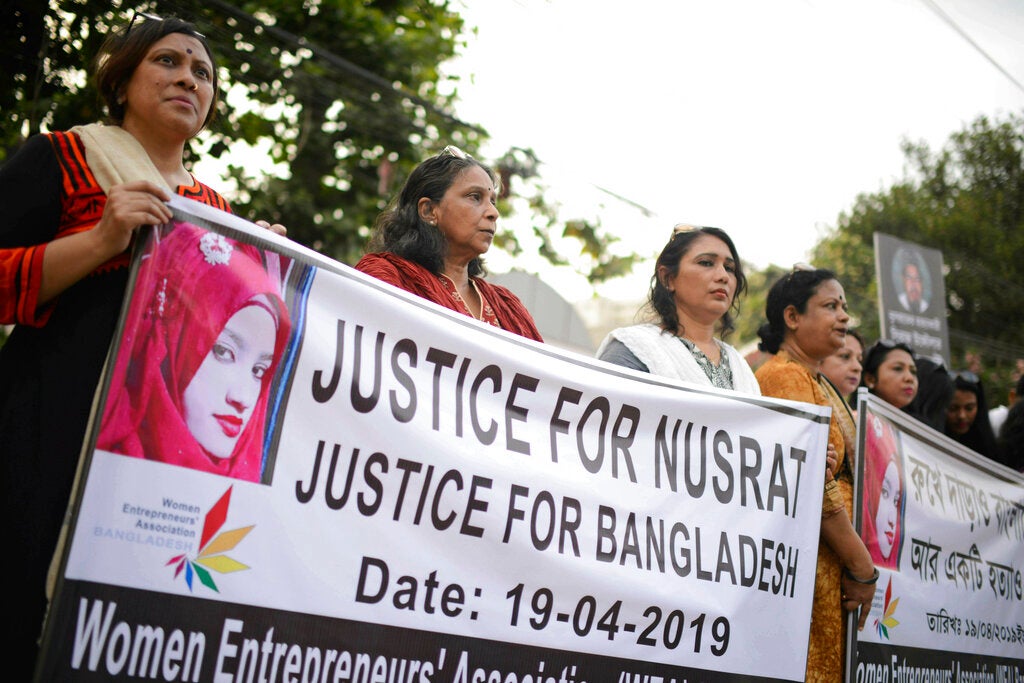 Protesters hold placards and gather to demand justice for 18-year-old Nusrat Jahan Rafi who was killed after she was set on fire for refusing to drop sexual harassment charges against her Islamic school’s principal, in Dhaka, Bangladesh, Friday, April 19, 2019. AP)

DHAKA, Bangladesh — Dozens of protesters took to the streets in Bangladesh’s capital to demand justice for an 18-year-old woman who died after being set on fire for refusing to drop sexual harassment charges against her Islamic school’s principal.

Nusrat Jahan Rafi told her family she was lured to the roof of her rural school in the town of Feni on April 6 and asked to withdraw the charges by five people clad in burqas. When she refused, she said her hands were tied and she was doused in kerosene and set alight.

Rafi told the story to her brother in an ambulance on the way to the hospital and he recorded her testimony on his mobile phone. She died four days later with burns covering 80% of her body.

The violence has shaken Bangladesh, triggering protests and raising concerns over the plight of women and girls in the conservative Muslim-majority nation of 160 million people where sexual harassment and violence are often unreported, victims intimidated and the legal process lengthy. Many avoid reporting to police because of social stigma.

“We want justice. Our girls must grow up safely and with dignity,” Alisha Pradhan, a model and actress, told The Associated Press during Friday’s demonstration. “We protest any forms of violence against women, and authorities must ensure justice.”

Tens of thousands of people attended Rafi’s funeral prayers in Feni, and Prime Minister Sheikh Hasina promised Rafi’s family when they met in Dhaka that those responsible would be punished.

At least 17 people, including students, have been arrested in connection with the case, said Banaj Kumar Majumder, the head of the Police Bureau of Investigation.

In late March, Rafi filed a complaint with police that the principal of her madrasa, or Islamic school, had called her into his office and touched her inappropriately and repeatedly. Her family agreed to help her to file the complaint, which prompted police to arrest the principal, infuriating him and his supporters. Influential local politicians backed the principal, and ruling party members were also among the arrested.

Police said the suspects told them during interrogations that the attack on Rafi was planned and ordered by the principal from prison when his supporters visited him. It was timed for daytime so that it would look like a suicide attempt, Majumder said.

Human Rights Watch said in a statement that Rafi’s family said that they had received death threats before the attack telling them to drop the case.

While Rafi’s case is now being treated with urgency, that wasn’t the case until her death.

A video taken on March 27 while Rafi reported the assault shows the local police chief registering her complaint but telling her that the incident was “not a big deal.” The chief was later removed from the police station for negligence in dealing with the case.

For Bangladeshi women, it is not easy to file sensitive complaints with police. Victims fear further harassment and bullying. Police often show an unwillingness to investigate such cases and are accused of being influenced by local politics or bribes.

But the call for dealing with violence against women, especially related to sexual harassment and assault, is getting louder.

“Nusrat Jahan Rafi’s death highlights the need for the Bangladesh government to take survivors of sexual assault seriously and ensure that they can safely seek a legal remedy and be protected from retaliation.”