A few things you might have missed from the Mueller report 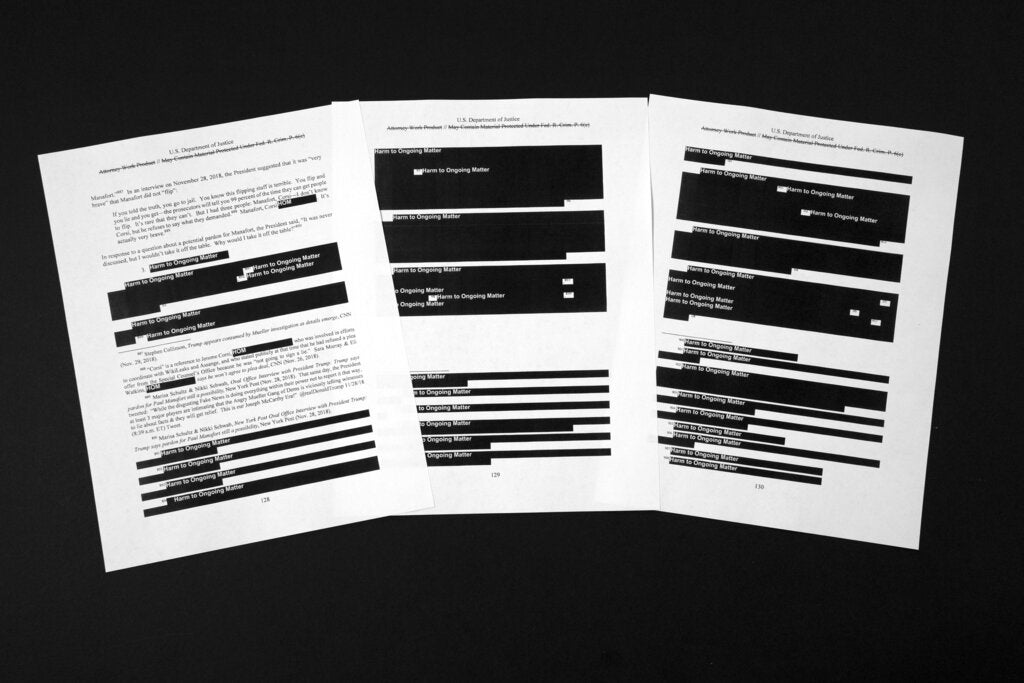 WASHINGTON  — Special counsel Robert Mueller’s report focuses on the seminal questions of whether President Donald Trump’s campaign colluded with the Russians and whether the president sought to illegally obstruct the investigation.

But tucked into the 448-page document are vivid anecdotes and meaningful revelations about a colorful cast of characters entangled in Mueller’s investigation.

Even as Russians hacked Democratic email accounts, a haphazard group of Americans launched a parallel effort of their own: to find tens of thousands of emails deleted from Hillary Clinton’s personal email server.

It had become an object of fascination for Trump, who asked multiple people around the campaign to find the missing emails.

Among them was Trump’s future national security adviser Michael Flynn, who enlisted the help of a former Senate staffer named Barbara Ledeen and Peter Smith, an investment adviser who’d been active in Republican politics.

The report documents multiple steps the two took to find the emails. Smith, for instance, recruited security experts and business associates and claimed to those he was seeking funding from that he was in contact with Russia-linked hackers.

It’s not clear the bluster amounted to anything as Mueller found no evidence that any of the Americans were actually in touch with any Russian hackers or had any connection to them.

Mueller confirmed that his office investigated whether Attorney General Jeff Sessions committed perjury at his January 2017 confirmation hearing by saying that he “did not have communications with the Russians” during the campaign.

The statement was false because Sessions did in fact have two separate encounters with the then-Russian ambassador to the United States — once during the week of the Republican National Convention in July 2016 and again in his Senate office two months later.

Sessions would later explain that he understood the question to be narrowly focused on whether he had exchanged campaign information with Russians as opposed to having more routine interactions with them.

Mueller’s report said prosecutors accepted that assertion as plausible and closed the case without prosecution.

‘We’ll be taken care of’

Former Trump campaign chairman Paul Manafort and his business partner Rick Gates were among the first of the president’s aides to be charged by Mueller, accused of a broad array of financial crimes.

For months, they stood united as co-defendants but that relationship was severed in February 2018 when Gates agreed to plead guilty and cooperate with the investigation.

The report reveals a curious encounter one month earlier when Manafort sought to dissuade Gates from cutting a deal. He told Gates that he had spoken with the president’s own lawyers and that “we’ll be taken care of,” according to the report.

Gates went ahead and pleaded guilty, testifying against Manafort in his trial. Manafort followed suit months later by pleading guilty and was recently sentenced to more than seven years in prison.

The day after Trump fired FBI Director James Comey, White House press secretary Sarah Sanders made a claim that even at the time rang false.

Turns out, it was.

Sanders, pressed on the president’s decision to fire Comey, said the White House had “heard from countless members of the FBI” complaining about Comey’s leadership and contradicting the conventional narrative that the rank-and-file was devastated by his termination. The next day, she again stood by her claim that she personally had been in touch “between emails and text messages” with a large number of FBI personnel who said they were very happy with the president’s decision.

The assertion during a White House press briefing was so baffling that an exasperated reporter at one point proclaimed, “I mean, really?”

But when questioned by Mueller’s team, Sanders changed her tune, saying her reference to “countless members” of the FBI was a “slip of the tongue.” She acknowledged that she had no basis for a separate statement that rank-and-file agents had lost confidence in Comey.

Sanders claimed in a series of television interviews on Friday that the “countless” comment was a “slip of the tongue” and not a scripted talking point but that she stood behind her general sentiment.

“I’m sorry I wasn’t a robot,” she said in one of the interviews.

In the summer of 2016, the WikiLeaks founder took an unusual interest in the Washington, D.C., murder of a former Democratic National Committee staffer.

News reports had already correctly attributed the hack of DNC servers to Russia, but Assange — whose anti-secrecy website had come in possession of stolen emails — wanted to “obscure the source of the materials” that it was releasing.

To do so, Mueller says, Assange seized on false conspiracy theories that linked the hacks to Seth Rich, the slain DNC staffer.

Even though, WikiLeaks had already been in touch with Guccifer 2.0, a fictitious Russian intelligence persona masquerading as a lone hacker, Assange promoted the idea that Rich may actually have been the source of stolen emails and connected to the DNC hack.

At one point, he announced a $20,000 reward for information leading to the arrest of Rich’s killer.

In an August 25, 2016 interview, Assange said, “If there’s someone who’s potentially connected to our publication, and that person has been murdered in suspicious circumstances, it doesn’t necessarily mean that the two are connected. But it is a very serious matter … that type of allegation is very serious, as it’s taken very seriously by us.”

The report sheds new light on the aftermath of Flynn’s discussion on sanctions with Sergey Kislyak, the then-Russian ambassador to the United States, during the presidential transition period.

After a Washington Post columnist disclosed in January 2017 that Flynn and Kislyak had indeed discussed sanctions, Flynn — under pressure from the president-elect — directed K.T. McFarland, who served as deputy national security adviser, to contact the newspaper and deny that sanctions had ever been talked about.

McFarland made the call even though she knew she was relaying false information, the report said.

The following month, after Flynn was ousted from the White House, Trump sought to have McFarland draft an internal letter stating that he had not directed Flynn to discuss sanctions with Kislyak. But McFarland refused because she didn’t know whether that was true, the report says.

Flynn’s sanctions discussions with Kislyak were central to the investigation and he pleaded guilty to lying to the FBI about it.