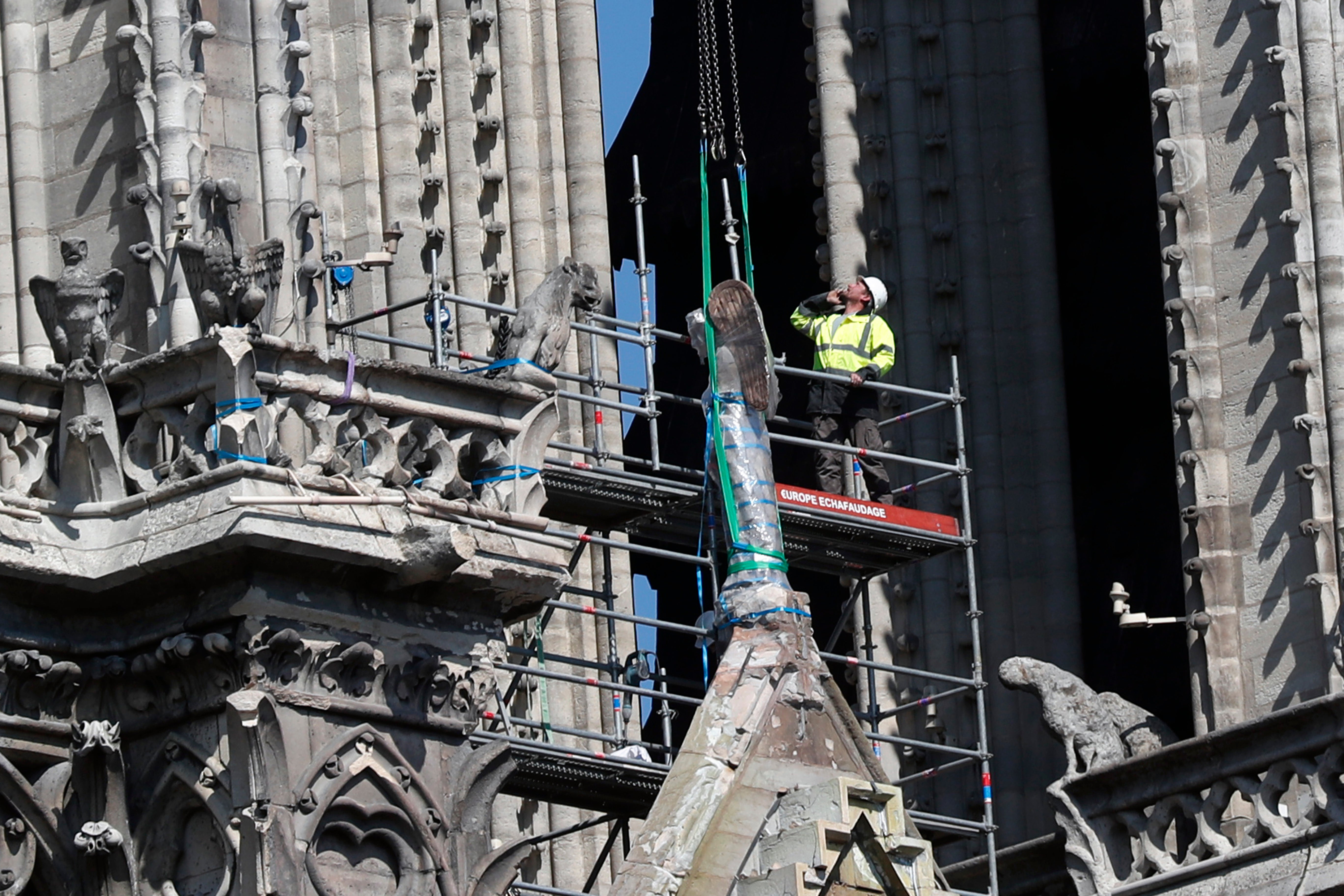 A worker prepares to remove a statue from the damaged Notre Dame cathedral, in Paris, Friday, April 19, 2019. Rebuilding Notre Dame, the 800-year-old Paris cathedral devastated by fire this week, will cost billions of dollars as architects, historians and artisans work to preserve the medieval landmark. (AP Photo/Thibault Camus)

The promising development came as Notre Dame’s parishioners celebrated Good Friday in a nearby church, praying for the damaged monument and celebrating its rescued relics such as the Crown of Thorns believed to have been worn by Jesus at his crucifixion.

“There is no more risk the edifice’s walls could fall down,” Lt. Col. Gabriel Plus, chief spokesman for the Paris fire service, told The Associated Press. Plus said firefighters have been able to cool down the walls and debris from the roof inside the cathedral, and there are no more “hot points” inside.

“It’s a miracle that the cathedral is still standing, and that all the relics were saved,” he said.

Investigators believe the fire was an accident and are studying multiple factors that could have contributed.

The cathedral’s rector said a “computer glitch” may have played a role in the rapidly spreading blaze that devastated the 850-year-old architectural masterpiece.

Rector Patrick Chauvet did not elaborate on the exact nature of the glitch. “We may find out what happened in two or three months,” he told local business leaders and construction workers.

Newspaper Le Parisien reported that a computer bug could have misdirected firefighters responding to the initial fire alarm. The unsourced report said investigators are also looking into whether the fire was linked to temporary elevators being used in a renovation that was underway at the time the cathedral caught fire.

The fire burned through the network of enormous centuries-old oak beams supporting the monument’s vaulted stone ceiling, dangerously weakening the building. Chauvet said there were fire alarms throughout the building, which he described as “well protected.”

Firefighter spokesman Plus said there could have been “a smoldering fire inside the frame” of the Notre Dame roof that was fueled by the wind.

Paris police investigators said they believe an electrical short-circuit most likely caused the fire. It’s believed to be one of multiple leads being investigated.

“Is it linked to the renovation work? A human error? The investigation will say,” Plus said.

He warned that “the central nave remains dangerous” but said the stones are drying out from the water sprayed from hoses during nine hours of firefighting efforts.

The last artworks were taken out of the cathedral Friday and taken to the Louvre for safekeeping pending renovation, he said.

Catholic worshippers carried out the Way of the Cross ritual near the cathedral to mark Good Friday, and the Crown of Thorns relic saved from the fire was presented to worshippers at the nearby Saint-Sulpice Church.

A public veneration of the crown is normally part of the ceremonies leading up to Easter at Notre Dame. But because of the fire, the crown was shown at a service Friday evening at Saint-Sulpice instead.

Judith Kagan, a conservation official at France’s Culture Ministry, said Friday the artworks inside Notre Dame had suffered no major damage from the fire.

Macron is moving quickly on the fire-ravaged monument’s reconstruction, which is being viewed both as a push to make it part of his legacy and a way to move past the divisive yellow vest protests over social inequality in France.

Notre Dame’s reconstruction is prompting widespread debate across France, with differing views over whether it should involve new technologies and designs.

Macron hasn’t offered any specifics on his vision for the roof or whether the frame should be wood, metal or concrete, according to his cultural heritage envoy, Stephane Bern. He has named a general, Jean-Louis Georgelin, former chief of staff of the armed forces, to lead the reconstruction effort.

Over $1 billion has already poured in from people from all walks of life around the world to restore Notre Dame.

According to an opinion poll by BVA institute published Friday — the first carried out since the fire — Macron has gained three points in popularity in the past month with an approval rating of 32%. That puts him back at the support level of September, before the yellow vest crisis, BVA said.

Although all French polls show that Macron’s popularity has remain low since a tax increase on retirees last year, they suggest his party may be ahead in France’s May 26 European Parliament election, with Marine Le Pen’s far-right party, the National Rally, close behind.

Despite the destruction of Notre Dame dominating the news in France, a new round of nationwide yellow vest protests was planned for Saturday. Interior minister Christophe Castaner said 60,000 police officers were being mobilized and demonstrations near Notre Dame would be be banned as he expects some protests to turn violent.

In a hopeful development Friday, 180,000 bees being kept in in hives on Notre Dame’s lead roof were discovered alive.

“I am so relieved. I saw satellite photos that showed the three hives didn’t burn. I thought they had gone with the cathedral,” Nicolas Geant, the monument’s beekeeper, told the AP.

Geant has looked after the bees since 2013, when they were installed as part of a city-wide initiative to boost declining bee numbers.

Geant said the carbon dioxide in the fire’s heavy smoke put the bees into a sedated state instead of killing them, adding that when bees sense fire they “gorge themselves on honey” and protect their queen. European bees never abandon their hives, he said.