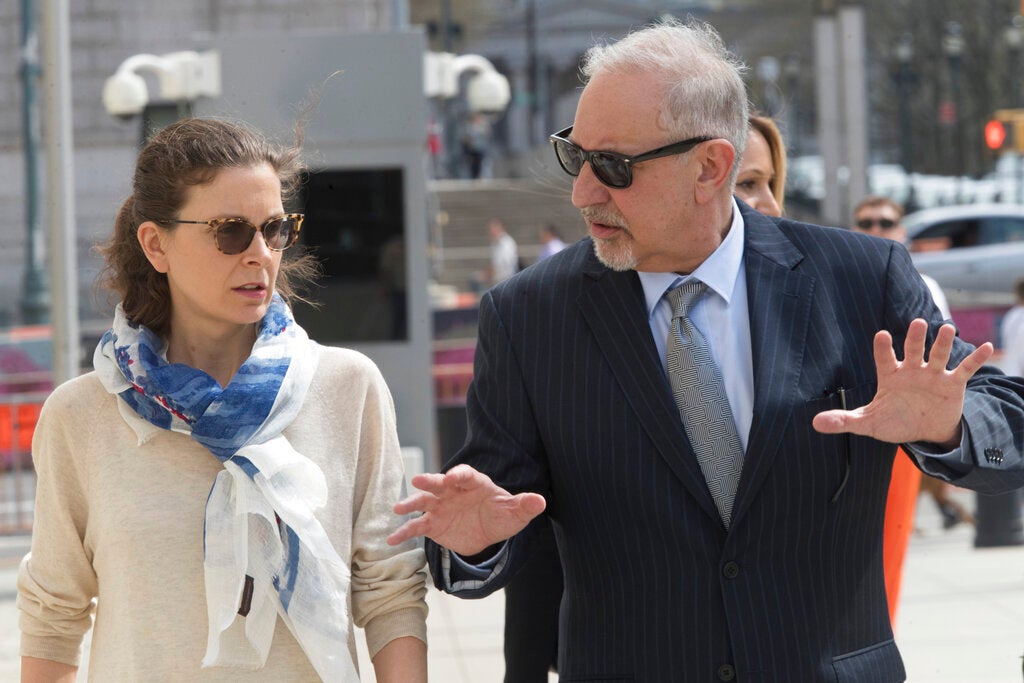 Clare Bronfman, left, arrives at Federal court with her attorney Mark Geragos in the Brooklyn borough of New York, Friday, April 19, 2019. Bronfman has pleaded guilty to charges implicating her in a sex-trafficking conspiracy case against an upstate New York self-help group. (AP)

NEW YORK — An heiress pleaded guilty on Friday in a sensational case accusing a cult-like upstate New York group of creating a secret harem of sex slaves for the group’s self-anointed spiritual leader.

Clare Bronfman admitted in her plea in federal court in Brooklyn that she harbored someone who was living in the U.S. illegally for unpaid “labor and services” and that she committed credit card fraud on behalf of Keith Raniere, the lead of a group called NXIVM.

Bronfman – the 40-year-old daughter of the late billionaire philanthropist and former Seagram chairman Edgar Bronfman Sr. – told the judge that she had wanted to help people through NXIVM but ended up dishonoring her family.

“Your honor, I was afforded a great gift by my grandfather and father,” Bronfman said. “With the gift, comes immense privilege and more importantly, tremendous responsibility. It does not come with an ability to break the law.”

She added: “For this, I am truly sorry.”

As part of a plea agreement, Bronfman agreed to forfeit $6 million from a fortune prosecutors say is worth $200 million. She faces more than two years in prison at sentencing on July 25.

The plea means Bronfman will avoid going to trial early next month with Raniere, who’s facing conspiracy charges alleging that his inner circle of loyalists created a secret society of women who were forced to have unwanted sex with him. Prosecutors say some of the women were branded with his initials as part of their initiation.

Among those defendants is Allison Mack , the TV actress best known for her role as a young Superman’s close friend on the series “Smallville.”

Bronfman had long been affiliated with NXIVM, giving away tens of million of dollars to bankroll Raniere and his program of intense self-improvement classes. She also paid for lawyers to defend the group against a lawsuit brought by its critics.

With the two guilty pleas on Friday, Raniere will face a jury by himself. Defense attorneys have insisted any relationship between their client and the alleged victims, including women expected to testify against him at trial, was consensual.

ADVERTISEMENT
Read Next
Woman’s brutal killing in Bangladesh triggers protests
EDITORS' PICK
DOLE eyeing P20-B subsidy for MSMEs
WHO resumes hydroxychloroquine coronavirus trials
Following WHO advice, Philippines resumes hydroxychloroquine trials
COOCAA TV Bounce Back Sale offers up to 50% off
Cherry Mobile teams up with Cloud Panda PH, launches online store
SMDC The Good Guys on the Go
MOST READ
It’s final: Anti-Terror Bill now only needs Duterte’s signature
‘She had no right to be in Singapore’: Youth pleads guilty to abusing Filipino maid
Piolo gets first call slip from ABS-CBN to resume ‘ASAP’ taping
Boycott China trends in India amid border row between them
Don't miss out on the latest news and information.

Boycott China trends in India amid border row between them

Terence Crawford thinks Manny Pacquiao fight ‘can get made’