BANGKOK – Two Australian doctors in Thailand to receive royal honors for helping rescue a boys soccer team from a flooded cave say they are looking forward to a reunion with the people they helped save. 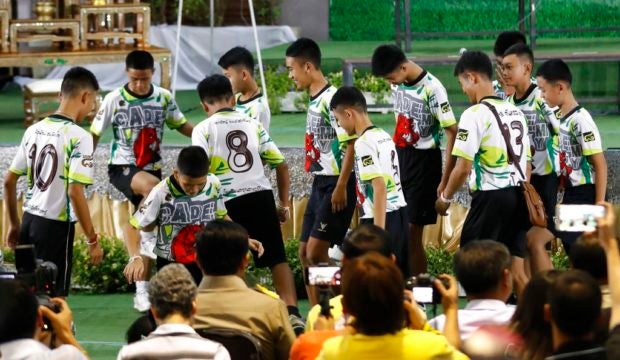 Members of the rescued soccer team and their coach dribble a few soccer balls before a press conference discussing their experience in the cave in Chiang Rai, northern Thailand, Wednesday, July 18, 2018. The 12 boys and their soccer coach rescued after being trapped in a flooded cave in northern Thailand are recovering well and are eager to eat their favorite comfort foods after their expected to go home soon. (AP Photo/Vincent Thian)

Richard Harris and Craig Challen were given the award at a ceremony Friday presided over by Thai Prime Minister Prayuth Chan-ocha.

They said before the award ceremony they were looking forward to going to the northern province Monday to see how the boys are faring./gsg