Even with pay hike, some cops still involved in robbery-extortion

A document from the CITF obtained by INQUIRER.net on April 2 showed that robbery-extortion cases were filed against 34 police officers in 2018 and eight cops from January to April this year.

(Definitely, you cannot rule out scalawags in the service. Some police officers will still be involved in robbery-extortion.)

From February 2017 (when the CITF was established) to December 2017, 31 police officers were also slapped with robbery-extortion charges. 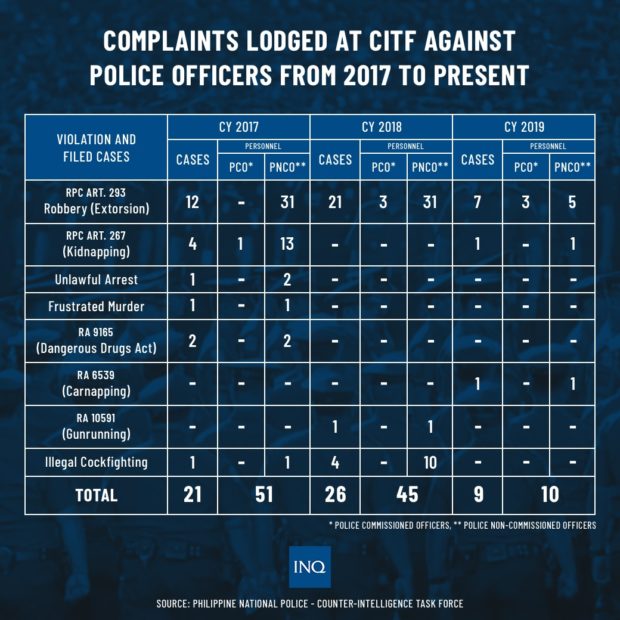 In January 2018, President Rodrigo Duterte signed a joint resolution of Congress allowing the increase in base pay of military and uniformed personnel. Raising the salary of uniformed personnel was among the President’s campaign promises as the 187,648-strong PNP is at the forefront of the crackdown against illegal drugs.

Under the resolution, a patrolman earning a base pay of P14,834 will start receiving a monthly pay of P29,668, or a 100-percent-increase in the original base pay.

The salaries of officers with the rank of Police Executive Master Sergeant up to Police General are set to increase again this year.

Though the number of police officers facing robbery-extortion charges in 2017 and 2018 is almost similar, Caramat said the data is not comparable since there were other variables that might have affected the numbers.

(It’s possible that the PNP or the CITF have intensified their campaign against scalawags in the police force or they have become more active. That’s why the number of arrested personnel is almost similar.)

(You cannot compare because it’s either we failed to monitor them or we lacked intelligence information to have them arrested. Many are involved in extortion activities, but we fail to catch them. So you cannot compare the data.)

Even the chief of the anti-scalawag unit of the PNP admits that some police officers abuse the Duterte administration’s centerpiece campaign against illegal drugs.

For instance, he said some police officers demand cash from suspected drug pushers they have arrested in exchange for downgrading their cases to possession of illegal drugs, which is a bailable offense.

In other cases, some police officers were also arrested by their colleagues inside police offices for demanding cash from relatives of drug suspects in exchange for the release of their jailed kin, or during entrapment operations for other violations.

(For example, a policeman is hooked on gambling, like cockfighting. [They extort to get cash to support their vices] because they were used to that kind of lifestyle.)

While most rookie police officers are idealistic, Caramat admitted that some lawmen lose their values over time. During training, some newbies also get associated with senior cops who were already “inflicted by the system.”

“They treat their job as a policeman as pagkakaperahan, not as a vocation. Iyon ang nawawala, ‘yung pagka-idealistic. Dati they want to become a policeman to serve other people kapag bago [pa sila], but ngayon hindi iyon ang line of thinking,” he said.

(They treat their job as a policeman as a source of money, not as a vocation. They lose their idealism. At the start, they want to become a policeman to serve other people; later on, they lose that motivation.)

However, in Caramat’s opinion, the number of police officers involved in extortion activities has decreased as the PNP is aggressively implementing its internal cleansing program.

Even PNP chief General Oscar Albayalde has warned that there will be “no mercy” for scalawags among his subordinates.

(Right now I am pretty sure that the number of policemen involved in robbery-extortion has decreased. In the past,  they do it brazenly, but now they are more cautious about committing wrongdoing.)

He said he was basing his assessment on the fewer number of complaints lodged at the CITF against erring officers who are mostly involved in robbery-extortion.

According to Caramat, from 483 complaints against the police received by the CITF in February 2017, the unit has received only 27 complaints from the public in January 2019, 16 in February, and 19 in March.

“Kung minsan nga wala na kaming ginagawa dahil dati nga [sobrang dami]. Sometimes we don’t have work to do unlike before when there were so many cases),” Caramat said.

He added that the police officers are now afraid of committing irregularities and are wary of the CITF, which he said is “the police of the police.”

(The number of complaints means the public has trust and confidence in the police force. People report complaints because they trust us.) /ee