Policemen are set to receive higher salaries starting January 15 after President Rodrigo Duterte signed Joint Resolution No. 1, authorizing the increase in the base pay of military and uniformed personnel.

Meanwhile, an average increase of 58.70 percent for all other police ranks would also be realized beginning this January 15, Philippine National Poilce (PNP) spokesperson Chief Supt. Dionardo Carlos said in a press briefing on Thursday.

The modified base pay schedule to be applied to all uniformed personnel under the Department of Interior and Local Government (DILG) that would be implemented in two tranches until 2019, are as follows: 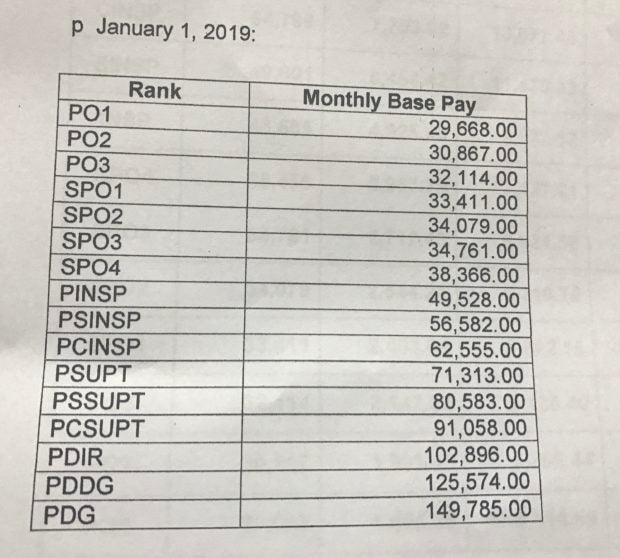 Police Chief Supt. Joselito Vera Cruz, of the PNP-Directorate for Comptrollership, admitted that the agency’s budget could not accommodate a doubled increase in base salary across all police ranks.

But, he pointed out, this increase in base pay and decrease in income tax under the Tax Reform for Acceleration and Inclusion (TRAIN) law should nevertheless translate to good service from police officers.

Below is the new monthly tax comparison of policemen: 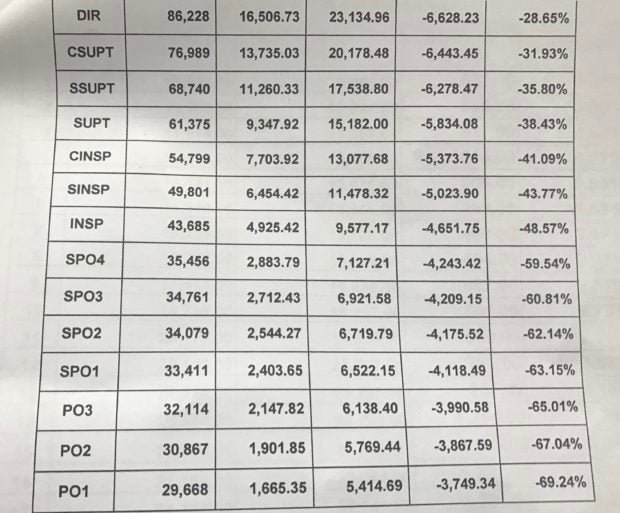 Around 76,000 POs1 or majority of their 182,000 members would benefit from the 100 percent increase in base pay, Carlos said, noting that they still need 21,000 additional policemen.

Meanwhile, Vera Cruz said the approved joint resolution also provides for the discontinuance of the provisional allowance and the officers allowance of police officials.

Nevertheless, he said, the increase in base pay would increase other allowances, which are granted as a percentage of base pay (e.g. longevity pay, flying pay, sea duty pay, instructor’s duty pay), and would also result to higher benefits upon retirement.

“This would be advantageous lalo na sa magre-retire kasi their pension would be computed based on the current rate,” Vera Cruz said.