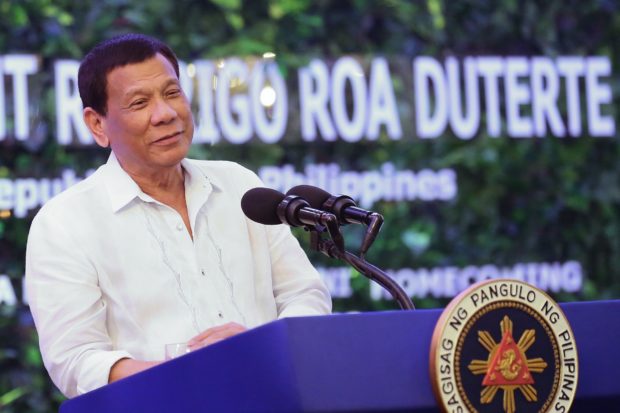 MANILA, Philippines — President Rodrigo Duterte signed the long-delayed, P3.8-trillion national budget for 2019 on Monday, but vetoed P95.3 billion in public works projects that were not among his priorities.

It was a victory for the Senate, which firmly opposed last-minute changes made to the budget bill by the House of Representatives that it considered unconstitutional.

Executive Secretary Salvador Medialdea said in a text message that the vetoed items were not found to be unconstitutional, but were just not among the programmed priorities.

But Senate President Vicente Sotto III cheered the Senate after learning that the President had vetoed what he believed were the amendments made by the House after Congress had ratified the spending bill.

“Hooray, Senate,” Sotto said in a brief message to reporters from Bangkok.

The postratification amendments were discovered and divulged by Sen. Panfilo Lacson, who considered them pork.

The rest of the Senate lined up behind Lacson and opposed the changes, threatening to question the budget in the Supreme Court if it was signed with the postratification alterations.

Lawmakers from the House, however, insisted they simply itemized lump sums in the spending bill.

The disagreement prolonged the delay in the enactment of the budget, which should have been signed before the end of 2018.

President Duterte tried to break the deadlock by calling the senators and the representatives to a meeting in the Palace, but both sides refused to budge.

In late March, Sotto moved to break the impasse by signing the ratified version of the spending bill and sending it to Malacañang with a letter to President Duterte advising him to veto the unconstitutional changes.

The President had threatened to veto the budget if it turned out to be unconstitutional.

Last week, complaining about the fighting between the senators and the congressmen in a speech in Bacolod City, the President threatened to veto the entire budget.

The Palace later said Mr. Duterte was only “exercising utmost care” in going over the spending measure to ensure that it was in accordance with the law.

Sotto said on Monday that he spoke with Medialdea last week and learned that the President would likely veto several items in the budget bill.

He said Medialdea told him that the Palace had received the recommendations of the Department of Budget and Management for a final version of the spending plan.

Sotto said Medialdea also told him that the President might forgo the traditional signing ceremony in Malacañang, usually attended by the leaders of the Senate and the House.

“If [the President] would announce the budget items he had decided to remove in front of the leaders of the House and [the] Senate, there might be a boxing ring,” Sotto said.

Medialdea said the President signed the budget on Monday.

Lacson said he had yet to see which items were rejected by Mr. Duterte, but added that it was “safe to assume” that these included “most if not all” the P75 billion that had been funneled to the districts of Speaker Gloria Macapagal-Arroyo’s allies in the House.

He said part of the vetoed items could be the P20 billion in “insertions” made by some of his colleagues in the Senate.

“Either way, it is victory for the Filipino taxpayers,” Lacson said in a text message to the Inquirer.

“Having said that, I would like to personally commend the President and his economic managers for coming up with a pork-free national budget,” he said.

“We welcome the President’s signing of the 2019 budget. We respect his decision to veto some items in the budget,” Majority Leader Fredenil Castro said.

With the signing of the 2019 budget, Malacañang now shifts from the reenacted 2018 budget, on which it has been operating since January. —With reports from Marlon Ramos and DJ Yap