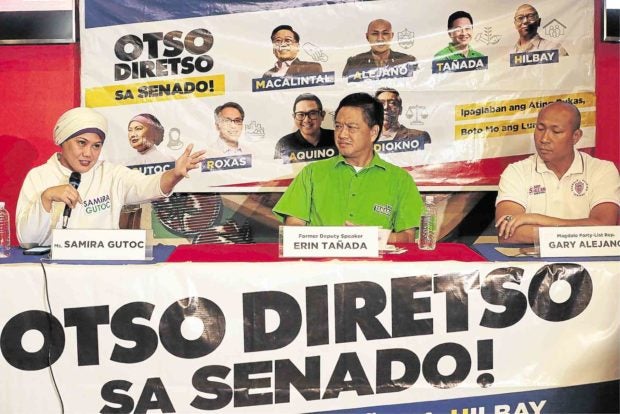 MANILA, Philippines — No, they are not a “yellow” force.

The opposition Otso Diretso coalition on Monday emphasized that it isn’t just a proxy of the Liberal Party (LP) and played down questions about the members’ unity, after former Interior Secretary Mar Roxas’ campaign manager admitted he was distancing himself from the team.

“The story of Otso Diretso or its individual members is not based on the story of the Liberal Party or former President [Benigno] Aquino [III],” Magdalo Rep. Gary Alejano said.

“There’s propaganda to paint the previous administration or any critic or opposition member as ‘yellow,’ and that we all have the same faces,” Alejano told a news conference.

“Let’s not be taken in by such propaganda,” he added.

“Yellow” is the Duterte administration’s code word for the Liberal Party, which used the color in the 2010 general elections to identify itself with the late President Corazon Aquino, whose signature color was yellow, and boost the chances of her son of winning his campaign for Malacañang.

Alejano and other Otso Diretso members were asked to comment on Caloocan Rep. Edgar Erice’s remarks in an Inquirer report on Sunday admitting that Roxas regretted wearing yellow and being so identified with Aquino in the 2016 presidential election, which he lost to President Duterte.

Erice also disclosed the Roxas campaign’s strategy of intentionally keeping himself apart from Otso Diretso and refusing to directly attack the President to avoid fallout.

He said the Roxas camp chose blue as its campaign color to set the former interior secretary apart from Aquino and to establish his own identity.

“It was a conscious decision [to change colors] because one mistake [Roxas] made in 2016 was acting like Robin to [Aquino’s] Batman . . . and Robin will never be Batman,” Erice said.

His remarks drew the ire of Aquino’s sister, television and movie actress Kris Aquino, who wrote in a since-archived post on Instagram: “Really—to blame his loss on my brother?”

“So even his defeat in 2010 is the fault of Noy?” Kris Aquino said, referring to Roxas’ loss to Binay in the 2010 vice-presidential election.

In a series of Twitter posts on Sunday, Erice defended Roxas’ loyalty to the Liberal Party.

“The question is why are we wearing blue. The simple reply is to [establish] our own identity, unlike in 2016 when we [were] like Robin when the position being sought [was] for Batman,” Erice said.

“We are loyal to the principles of the LP. [We] fought and sacrificed for the party in the good and bad,” he said, adding that he “simply answered [the Inquirer’s questions] with what I know is the truth.”

Former Quezon Rep. Erin Tañada on Monday said it was a nonissue as far as he was concerned.

“We don’t look at this as a problem, because there are larger issues in the country to talk about, so for us, this is not something that should even be discussed,” he said at the same news conference.

Tañada dismissed suggestions that Otso Diretso members were not gaining much traction in preelection surveys because they were too focused on just opposing the administration’s policies instead of offering solutions.

“I beg to disagree that we’re only opposing . . . it’s just that the other side doesn’t like to engage, because they know they will be embarrassed,” he said, noting the administration candidates’ refusal to participate in public debates.

Peace advocate Samira Gutoc said she understood the strategy of the Roxas campaign, considering he and former President Aquino had been victims of “fake news.”

“President Aquino and Mar have been the victims of trolling that’s systematic, purposive and deliberate to destroy them,” she said.

Gutoc called on President Duterte’s supporters, whom she referred to as “DDS,” after the Davao death squads, to stop trying to troll Roxas and Aquino on social media.

“If you don’t want Mar to win, don’t do that. Because we operate here as candidates. We don’t do systematic trolling against the administration candidates. We can’t afford that,” she said.

Alejano said the public should not be deceived by the false claim that Otso Diretso was just an extension of the Liberal Party.

“In fact, that’s the direction in which we are being pushed—that all opposition or Otso Diretso are ‘dilawan’ (yellow),” he said.

The truth, according to Alejano, is “we have each our own opinion.”

Alejano also denied any rifts among the members of the team.

“So far in my personal experience, we have good camaraderie. With Sen. Mar Roxas, along with [Sen.] Bam Aquino, our cooperation is OK,” he said.

“But I’m glad to state as well that we’re not perfect. The previous administration was not perfect, and that includes Senator Mar, former President Aquino… But that’s all in the past,” he said.