MANILA, Philippines — An organization of human rights lawyers on Monday sought the Supreme Court’s protection from alleged continuing harassment and “red tagging” of their members by the military and the police.

In a 23-page petition, the officers and members of the National Union of Peoples’ Lawyers (NUPL) sought the Supreme Court’s help by filing a petition for writ of amparo and writ habeas data.

“The petitioners, bearing only their legal skills, compassion for the underprivileged, dedication to justice and a mighty pen, have no recourse but to ask for the Honorable Court’s protection from harassment, intimidation, and violence committed against them by State forces and their agents,” the petitioners said. 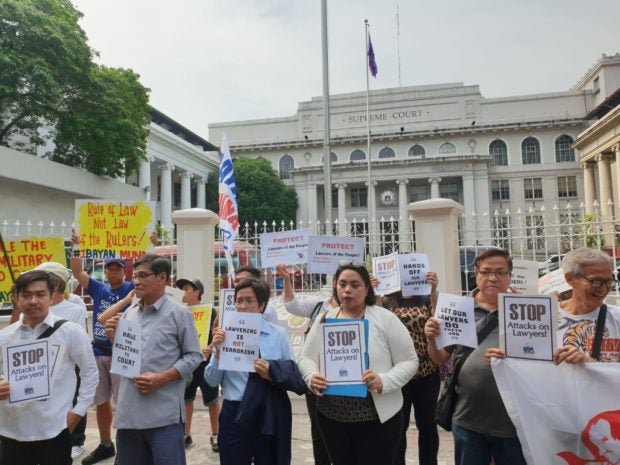 Through the issuance of a writ of amparo, the petitioners are hoping to get protection for its members who are currently tagged as supporters of communists movements.

On the other hand, the petitioners said the issuance of a writ of habeas data is necessary to compel the respondents to produce, correct or to destroy files in their possession or under their control that are being used to threaten their safety.

The NUPL cited in their petition specific incidents when their officers and members experienced the alleged harassment by military officers and were “tagged, threatened, vilified or subjected to surveillance.”

“A number are tailed, some receive threatening text messages, some are publicly vilified in radio programs, and still a few were even included in a shotgun petition to declare the CPP-NPA as terrorist organizations, maliciously labeling them as members of these rebel organizations,” they stressed.

“In the instant case, the pattern is crystal clear: Petitioners are harassed not for their individual actions as lawyers per se, but for being members of the NUPL and the cases, clients and issues they take on. Given the context, history and contemporaneous statements and events,

Petitioners have a well-founded belief that the respondents herein and their agents are responsible in many ways for the attacks against NUPL and its members,” petitioners added.

Twenty-four lawyers were killed from June 2016 to 2018. The figure is higher compared to the 27 lawyers who were killed in a span of eight years, from 2006 to 2014, based on data from the international organization Lawyers for Lawyers

A separate data showed that 55 lawyers were attacked or received threats from July 2016 to January 2019.

“Despite the increasing number of attacks against lawyers and members of the legal profession, apparently no case has been filed in court against any perpetrators,” the petition read.

They also maintained that they are merely fulfilling their mandate of representing the underprivileged and taking a stand on various issues.

Read Next
Palma to Catholics: Reflect this Lent than going to the beach, please
EDITORS' PICK
Leveling up your ‘lutong bahay’ with the kitchen companion you never knew you needed
WATCH: Mga eskwelahan na ginawang quarantine facility, binigyan ng dalawang linggo para linisin
Crisis seen in absence of jeepneys in Metro Manila
Cherry Mobile teams up with Cloud Panda PH, launches online store
Gov’t urged to shift public transport system to service contracting
MMDA: Commuters to blame for chaos
MOST READ
MMDA to sue, slap P1,000 fine on bike group
MMDA: Commuters to blame for chaos
PH walks back, suspends VFA termination ‘upon the President’s instruction’
Calida ‘just the lawyer, not the client’ and must ‘never lose his cool’ – Macalintal
Don't miss out on the latest news and information.