Reconstruction of war-devastated area expected to be completed by November
By: Richel V. Umel - @inquirerdotnet
Philippine Daily Inquirer / 05:20 AM April 15, 2019 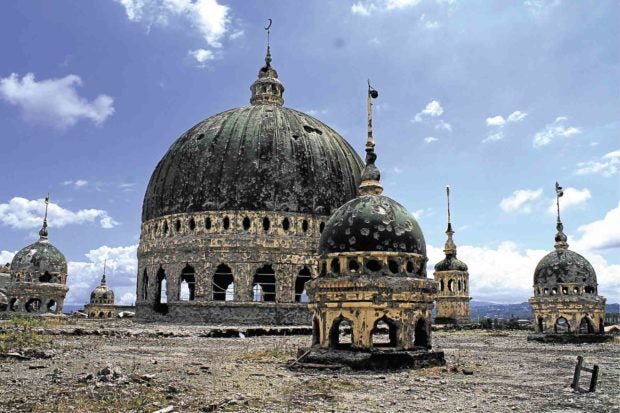 REBUILDING The bullet-riddled minaretes stand solemn and sacred on top of the Grand Mosque, which symbolize the strong Muslim faith in religion. —RICHEL V. UMEL

MARAWI CITY — The Task Force Bangon Marawi (TFBM) has been given the go signal to start the debris clearing inside the “most affected area” of this war-devastated city.

Secretary Eduardo del Rosario, Housing and Urban Development Coordinating Council executive director and TFBM chair, said among the structures that they had scheduled to demolish was the CMD building near the Bato Ali Mosque here.

The owner of the building had given the consent for its demolition. The structure was the stronghold of the Islamic State-inspired Maute group when it attacked Marawi City in May 2017.

According to Del Rosario, they hoped to clear Marawi of debris before the end of the year and allow residents to reenter the city based on their assigned sectors.

He also said they wanted to complete the sectional division of the city to ensure that areas were deemed safe from unexploded bombs or mines before civilians were allowed to return.

He said Sector One residents would be the first group to be allowed to return in July.

He said those who would want to enter the sector would be handled individually so that the city government could properly scrutinize their applications for repair or rebuilding permit and have their properties inspected by the city engineering office.

In August, the TFBM would allow residents of Sectors Two and Three to return. Those living in Sectors Four and Five would be allowed in September and those in Sectors Six and Seven in October. The rest of the sectors would return in November.

Del Rosario said the debris clearing, demolition of all unsafe structures, repair and reconstruction are expected to be completed by November.

According to him, the biggest challenge for the task force was dealing with impatient homeowners, most of whom had been forced to live in cramped evacuation centers for the past two years.

“We are appealing to the residents to be patient, understanding and supportive to hasten the repair of Marawi. We need to help each other,” he said.