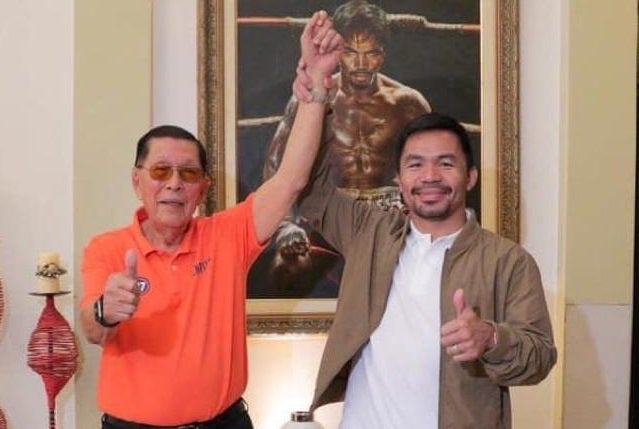 Filipino boxing legend Senator Manny Pacquiao (right) raises the hand of former Senate President Juan Ponce Enrile, who is seeking a comeback in the Senate in the May elections.

Enrile is considered by many to be still very much in the race for the Senate in the coming May elections.

Enrile said he and Pacquiao met with each other “to discuss our common objectives.”

Those common objectives include adequate water and energy supply for the public. These are especially relevant issues given recent shortfalls in these sectors and the public outcry as a result.

Enrile promised to keep a closer watch on the “privatization of companies concerning public services.” “These are issues I will take up in the Senate,” he said.

While Enrile has extensive Senate experience, he has partnered with new blood in the person of Pacquiao who was voted into the Senate in 2016.

The veteran Enrile was thankful for Pacquiao’s clear support and described the boxer-senator as a “hero to me and to all Filipinos.”