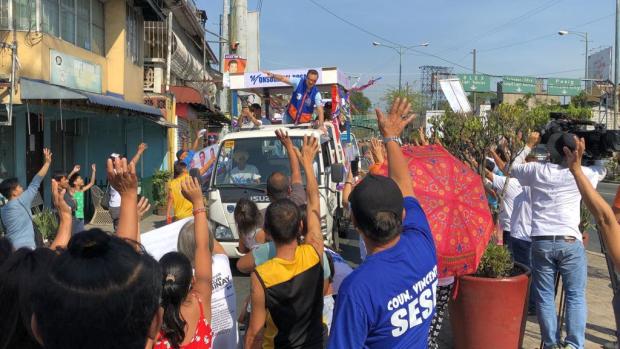 Makati Rep. Monsour del Rosario, who is running for Makati vice mayor in the May 2019 elections, waves to supporters during his party’s campaign last Saturday, March 30, 2019. (Contributed photo)

MANILA, Philippines — The official campaign period has begun for local candidates nationwide for the May 2019 elections. One of the more interesting cities to watch out for is Makati, where two Binays are running against each other for the top post.

But just as interesting is the vice mayoralty race in that city.

Running for vice mayor under the ticket of Jejomar Erwin Binay Jr. is Monsour del Rosario — the Olympian, the Philippine team’s chef de mission in the 2019 Southeast Asian Games, and now House representative for the 1st District of Makati.

During their party’s first motorcade last Saturday, March 30, people cheered Del Rosario as he enthusiastically greeted them from his truck.

At one point, he even came down to be closer to the people on the ground.

“It’s touching to see this kind of enthusiasm from our friends here in Makati,” Del Rosario said. “Some people come to us thanking us for staying in Makati instead of going for a senatorial seat. Some people are also thanking us for having helped them. We cannot forget about them. The people on the ground are the people we must serve. Every candidate must never forget that amidst the political conflicts.”

He has great plans for the people in Makati as vice mayor.