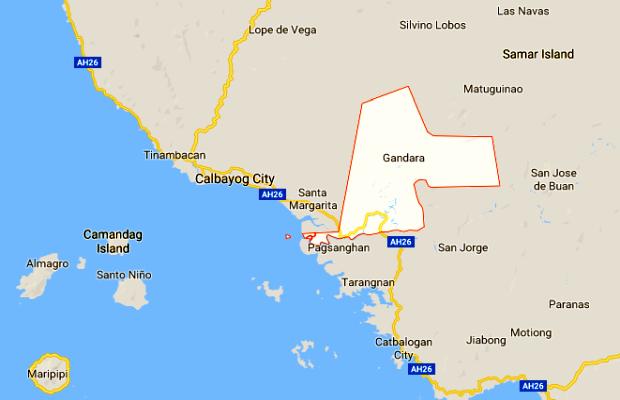 Gandara (outlined in red) is a second class municipality in Samar. (Image from Google Maps)

ORMOC CITY — Some 14 gunmen shot at the houses of some barangay officials in Gandara, Samar, on the afternoon of Friday, April 12 — one of them accidentally being shot in the head, resulting in his instantaneous death.

Capt. Joselito Tabada, chief of the Gandara Municipal Police Station, identified the dead gunman as Zosimo Casaljay, who had a warrant of arrest for murder, issued by Judge Feliciano Aguilar of Regional Trial Court Branch 41 in Gandara, with no bail recommended.

According to Tabada, Casalajay was accidentally shot in the head by someone in his own group. His companions immediately fled.

In an interview, Tabada said Mylene Cabagtong, a Barangay San Antonio councilor, reported the incident to the police.

Corocoto was hit in the foot.

Tabada said the gunmen were led by Edmar Wahingon.

As the gunmen were firing, residents either dropped to the ground or ran for cover.

According to Tabada, he immediately sent officers to the area, where they found the dead gunman.

Fearing for their safety, some 40 persons, along with other barangay officials, evacuated to the town proper.

Investigators are still determining the motive for the attack. Meanwhile, the police launched hot pursuit operations against the suspects.