Police clueless on Laguna abduction of trader on narcolist 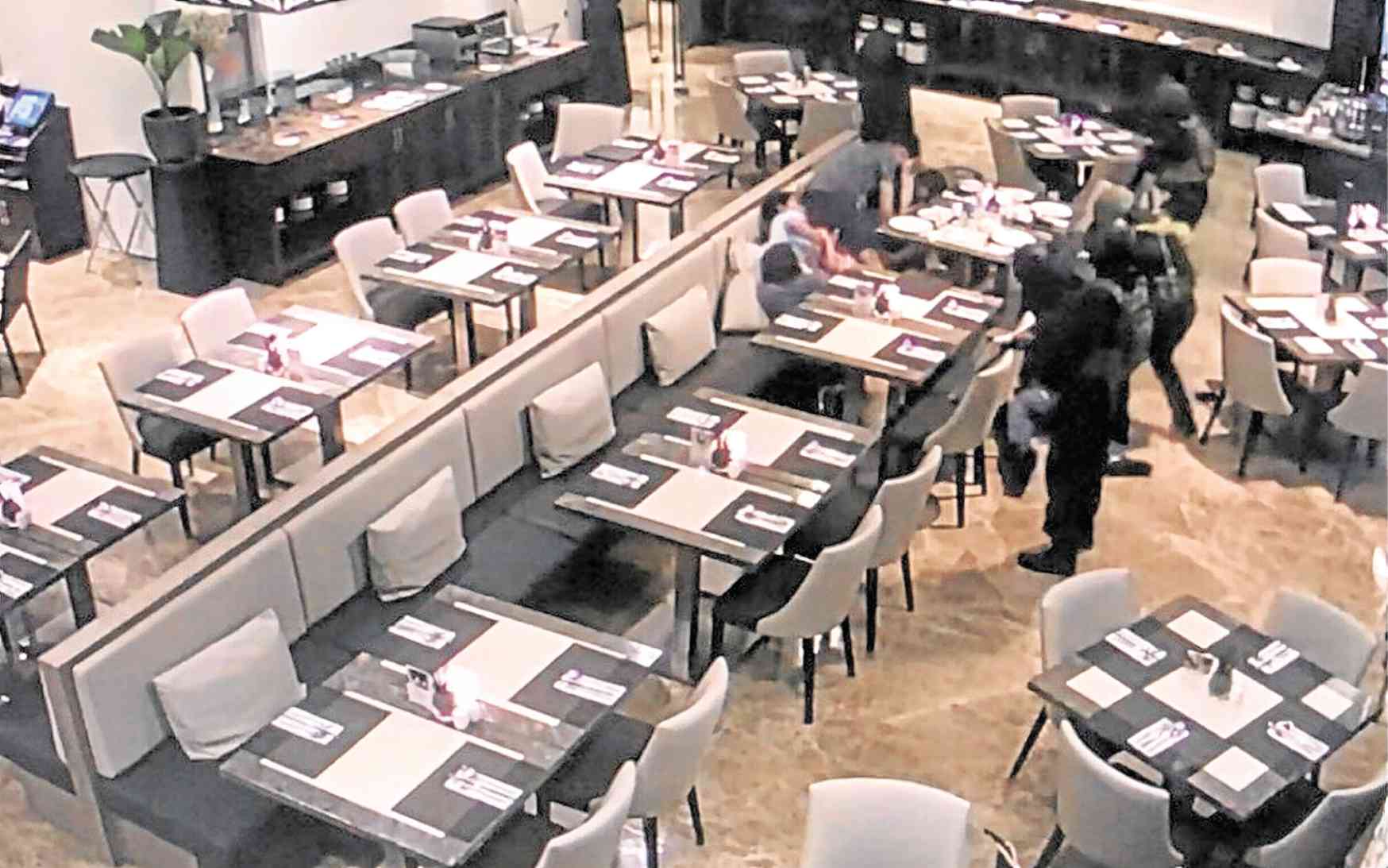 PROOF Footage from security cameras recorded the April 3 abduction of businessman Allan Fajardo, who was beaten up by armed men before he was dragged away. —CONTRIBUTED PHOTO

SAN PEDRO CITY—Allan Fajardo was supposed to meet with two people, reportedly involved in quarrying operations, the night of April 3 the controversial businessman was taken by armed men in a four-star hotel in Sta. Rosa City, Laguna.

But for some reason, the two men, Jaime Umali and one identified only as “Gab,” did not show up.

Instead, around 30 fully armed men in combat uniform stormed a restaurant at the Seda Hotel in Nuvali where Fajardo had taken a table for dinner.

His bodyguard, Joseph Alvarez, took a seat near the restaurant’s bar a few steps from his boss. Fajardo had yet to order food when the armed men barged in and ordered the hotel staff and other guests to lie facedown on the ground.

The armed men came in two vans. They first took Fajardo’s driver and aide, Ricky Atienza, at the parking lot, shortly after he dropped off Fajardo and Alvarez at the hotel.

“The first ones (who went inside the restaurant) seemed not to know who [Fajardo] was. It took them some time identifying him. Then the second van arrived and that was when they were able to identify [Fajardo],” Orate said.

The hotel’s security camera footage showed the armed men kicking Fajardo before dragging him onto the van that was waiting outside.

“[Fajardo] even left behind his shoes,” Orate said.

A police source, who declined to be identified, said when the armed men missed Fajardo the first time, the businessman was able to call his wife, Noreen, and told her “something like, ‘I was being forced to lay down.’”

It was not clear whether Fajardo left his phone intentionally but the source said Alvarez had taken it after the armed men had left and gave it to Noreen later that night.

It was also not clear what happened to Alvarez, who was last heard of on April 3 after escaping the abductors to meet Noreen, the source said.

While the police were doing a parallel investigation, the family had asked the National Bureau of Investigation to take over the case, Orate said.

The NBI said it had questioned two “persons of interest” who could shed light on the incident.

In particular, the testimony of Fajardo’s aide, identified only as “Cardo,” could help pinpoint who Fajardo was wary about when he went to the Seda Hotel.

Cardo was also supposed to arrive at the hotel before Fajardo as a precaution, but the aide did not show up.

“Supposedly Fajardo asked, ‘Where are you? Why were there too many policemen here?’ Cardo answered that it was probably because there were also VIPs in the hotel, and that he was coming soon anyway,” Dongallo said.

However, Dongallo questioned why Cardo deleted the call log proving Fajardo called him.

Fajardo’s business partner is the NBI’s second person of interest. But Dongallo said the businessman had denied that he was supposed to meet with Fajardo.

Dongallo said the two men expressed willingness to submit their testimonies under oath and to undergo polygraph tests to prove their innocence.

As of Wednesday, the supposed abductors had yet to contact or demand for any ransom from the family, police said.

Earlier, Police Col. Eleazar Matta, Laguna police director, said they were looking into the possibility that Fajardo may have “staged” the whole thing “in order to slip out of the scene.”

“I would imagine it [the hotel] was a controlled place, secured. How could you abduct somebody [in that kind of place],” Matta said.

According to the police source, Fajardo and his family were planning to leave for the United States. The businessman was included in the police watch list for suspected involvement in illegal drugs, the Inquirer learned.

“There were too many possibilities. It could be [carried out by] a rival armed group,” Matta said.

Fajardo became controversial even as he stayed away from the public limelight in Laguna and Batangas provinces as he once led the mayor’s anticrime group (MACG) in Tanauan City, then under Mayor Antonio Halili.

The MACG was responsible for the arrest of suspected criminals and for “parading” them under Halili’s “shame campaign.” Critics said the MACG was just a front for the mayor’s private armed group.

In July 2018, Halili was gunned down during a flag-raising ceremony at the Tanauan City Hall, months after he was named in President Duterte’s list of narcopoliticians.

Fajardo has had multiple run-ins with the police, especially after he filed a complaint against at least 10 Calabarzon (Cavite, Laguna, Batangas, Rizal and Quezon) policemen who raided his house in Tanauan under the pretense of looking for illegal firearms.