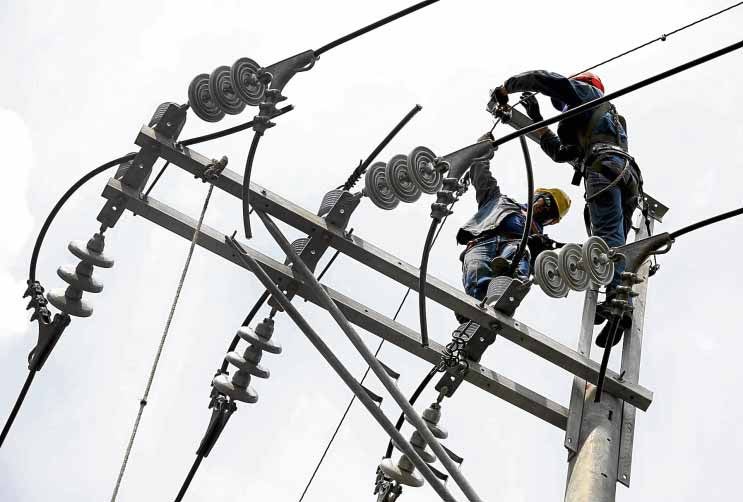 POWER FIX With artificial shortages allegedly being forced on the Luzon grid to jack up rates, it
is likely electricity will be insufficient on election day in May. —LYN RILLON

Colmenares said the shutdowns could be intended to create artificial shortages that would justify rate increases.

“We suspect these power companies are just using these artificial power shortages, knowing they hold us consumers as hostages, with summer [here] and national elections coming,” he said in an interview.

Gatchalian, head of the Senate committee on energy, said he would ask the Department of Energy (DOE) and the Philippine Competition Commission (PCC) to look into possible collusion among the power producers after the Luzon grid was put on red alert on Wednesday.

At least five power plants reported forced outages and unplanned outages, resulting in the red alert on the Luzon grid.

National Grid Corporation of the Philippines, operator of the system, warned consumers, including those serviced by Manila Electric Co. (Meralco), of rolling brownouts.

Gatchalian said it was necessary to check for possible collusion because of the price spike on the Wholesale Electricity Spot Market (WESM). He also expressed concern that almost 1,400 megawatts—a relatively big amount—were on unplanned outage.

“We have to really study this incident very carefully because a big portion of the supply was affected, almost 1,400 megawatts out of the close to 13,000 megawatts in Luzon,” he told reporters.

“We will now flag [the] DOE and also [the] PCC to look for possible collusion,” he added.

Colmenares also noted the price spike on the WESM.

“We need to find out who is profiting from these power plant shutdowns because electricity prices literally went [through] the roof [on] the WESM,” he said.

He said the Energy Regulatory Commission and Philippine Electricity Market Corp., which runs the WESM, should look into possible collusion and market manipulation.

“We cannot have a repeat of 2013 [when] Meralco connived with the power generators to jack up the rates,” Colmenares said.

Gatchalian said he was also worried about a greater possibility that there would not be enough electricity on election day in May.

“If you’re talking about 1,400 [megawatts] and this concerns a lot of plants, then the possibility that we will have brownouts [on election day] rises. And that should be the primary concern of [the] DOE, to ensure there would be enough [electricity  during the balloting and the counting of the vote], or else that would create a lot of tension during the election period,” he said.

Gatchalian noted that when a plant goes on forced outage, the usual reason is that there has been a tube leak.

He said there was a need to look into why this happened in the first place and why it had not been prevented.

“These are the things the DOE and [the] PCC should look at because we don’t want for there to be a cloud of doubt when it comes to the management of the plant. And the recurring issue that there may have been collusion to increase the price must be done away with,” he said.

The senator recalled that during a recent hearing called by his committee, energy officials assured him that there would be enough electricity on the Luzon grid during summer and especially on election day in May.

The caveat is that there will be enough electricity if no power plant conks out, he said.

“But the question is, why did the plant break down,” Gatchalian said.

Bayan Muna Rep. Carlos Isagani Zarate urged the leadership of the House of Representatives to open an inquiry into the shutdowns and the successive power rate increases.

“Without a probe, these power companies might think they can run away with this modus (operandi) as a reason to jack up power rates, along with other pass-on rates such as missionary fees and system losses,” Zarate said.

The party-list group Murang Kuryente on Wednesday denounced Meralco’s announcement of an impending increase in power rates for April due to higher prices on the WESM and the falling value of the peso.

“We note how Meralco again chose to jack up electricity [rates] as we are already scrambling to pay whatever charges it imposes just to keep the lights on in [our] houses while it continues to enjoy record profits,” said Gerry Arances, Murang Kuryente first nominee in the House.

Murang Kuryente has sued Meralco and seven power producers over allegedly irregular supply agreements that the group says will bind consumers to increases in generation charges over the next 20 years.

Members of the group picketed Meralco offices across Luzon on Wednesday to protest the generation charge increases.