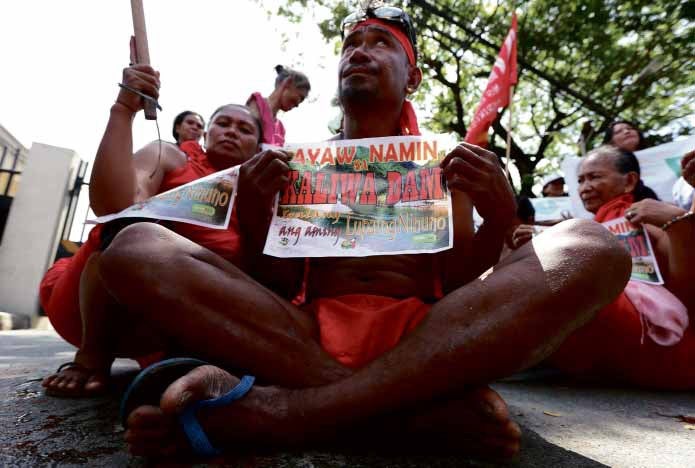 PROTEST AGAINST DAM Members of the Dumagat-Remontado indigenous group hold a protest at the headquarters of theMetropolitan Waterworks and Sewerage System in Quezon City against the proposed KaliwaDam,which is expected to submerge their communities. —NIÑO JESUS ORBETA

MANILA, Philippines — A multibillion-peso dam being pushed to be built in Rizal and Quezon provinces to solve Metro Manila’s water shortage does not have a free, prior and informed consent (FPIC) from indigenous communities as required by law, a multisectoral group said on Wednesday.

A similar defect was reported earlier in another Chinese-funded enterprise, the Chico River Pump Irrigation Project in Cordillera.

Both projects are being financed by loans from the Chinese government.

Leaders of Stop Kaliwa Dam said proponents of the P18.7-billion New Centennial Water Source-Kaliwa Dam Project had not obtained an FPIC from the Dumagat-Remontado, an ethnic community occupying lands within the Kaliwa River Basin.

According to the Metropolitan Waterworks and Sewerage System (MWSS), the project will be crucial in ensuring water supply in Metro Manila. It will be funded by a bilateral loan from the Export-Import Bank of China.

The laws require the National Commission on Indigenous Peoples (NCIP) to provide the Dumagat-Remontado copies of project documents before they can engage in dialogues or give informed decisions, Montellana told a press conference in Quezon City.

He said the NCIP and the MWSS “continue to violate the laws by starting the project without an FPIC, hiding documents from the IPs and forcing them to join dialogues even before knowing the nuances of the project and without proper consultation.”

Contrary to the MWSS claim that only 47 indigenous families will be affected by the Kaliwa Dam project, Montellana’s group said the infrastructure would inundate the homes of 1,000 households at Barangay Daraitan in Tanay, Rizal, and 500 more in Pagsangahan, General Nakar, Quezon.

Sacred sites and burial grounds will also be submerged by the dam’s reservoir, it said.

The Freedom from Debt Coalition (FDC), a member of Stop Kaliwa Dam alliance, warned against a ticking “debt bomb,” referring to China-funded projects.

These projects bind the country to an onerous agreement “that encroaches on our sovereignty and opens up assets and natural resources to potential seizure by China,” said Rene Ofreneo, FDC president.

Ofreneo warned of a resurgence of the Marcos era’s debt bomb—infrastructure-driven overborrowing from foreign countries and a high debt-to-GDP (gross domestic product) ratio that made the country a “victim of automatic debt servicing” for three decades.

Add to that China’s higher interest rate for the Kaliwa Dam project—2 percent compared with Japan’s 0.25 percent-0.75 percent—and the possibility of using the country’s patrimonial assets as collateral, he said.

FDC contested a section of the preferential buyer’s credit loan agreement with Export-Import Bank of China, which states that the deal and all rights and obligations between the parties “shall be governed by and construed in accordance with the laws of China.”

The provision also prescribes that any dispute arising from the contract shall be arbitrated by the Hong Kong International Arbitration Center, a Chinese arbitration body.

“Every country is looking out for itself, especially China. But President Duterte was left without a weapon to defend himself [against criticisms on the project]. But then, why is China not defending its  ‘friend?’” Ofreneo said.