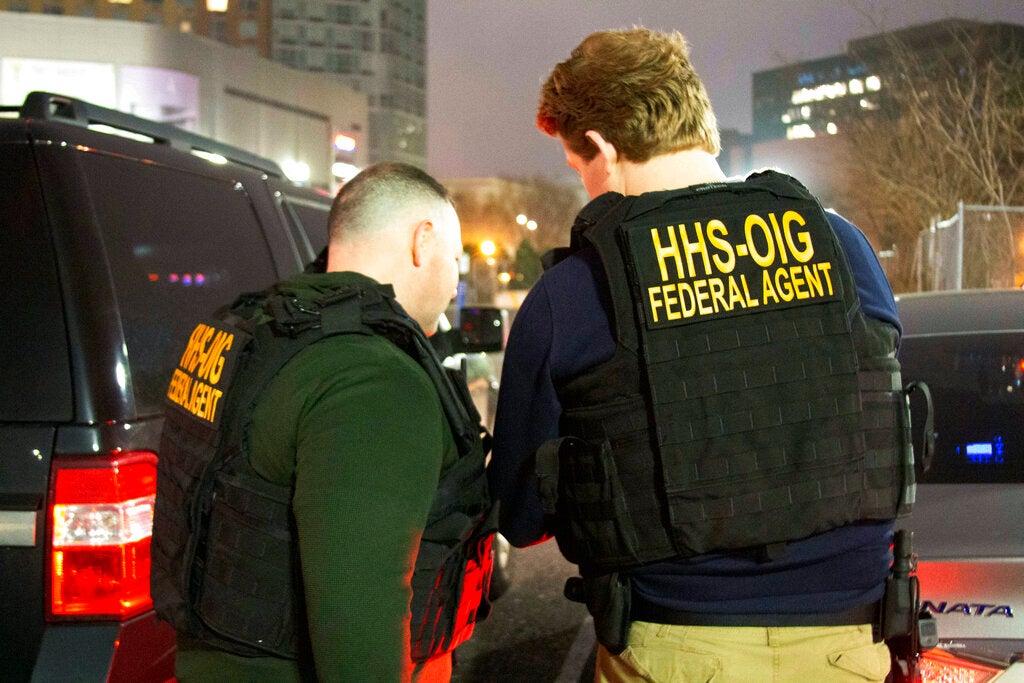 WASHINGTON — Federal agents on Tuesday broke up a billion dollar Medicare scam that peddled unneeded orthopedic braces to hundreds of thousands of seniors through call centers in the Philippines and in Latin America. Two dozen people were charged, including doctors accused of writing bogus prescriptions.

Profits from the scheme were laundered through offshore shell companies and then used to buy high-end cars, yachts and luxury homes here and abroad, officials said.

Medicare’s anti-fraud unit said it’s taking action against 130 medical equipment companies implicated. The companies billed the program a total of $1.7 billion, but not all of it was paid out.

The loss to Medicare was estimated at more than $1.2 billion.

The Health and Human Services inspector general’s office said the fast-moving scam was fueled by kickbacks among the parties involved. The FBI, the IRS and 17 U.S. attorney’s offices took part in the crackdown.

“The telemedicine we are talking about is basically a tele-scam,” said Gary Cantrell, who oversees fraud investigations for the HHS inspector general’s office. “We are not talking about the use of advanced technology to provide better access to care.”

Officials said the scam was detected last summer as complaints from beneficiaries poured in to the Medicare fraud hotline.

They said telemarketers would reach out to seniors offering “free” orthopedic braces, also touted through television and radio ads. Interested beneficiaries would be patched through to call centers, part of what officials described as an “international telemarketing network” with operations in the Philippines and throughout Latin America.

After verifying Medicare coverage, the seniors would be transferred to telemedicine companies for consultations with doctors, who wrote prescriptions for orthopedic braces, regardless of whether the patients needed them or not. Sometimes the same patient would get several braces.

Officials said it’s one of the biggest frauds the inspector general’s office has seen. Charges were being brought against defendants in California, Florida, New Jersey, Pennsylvania, South Carolina and Texas. Cantrell said federal agents had gained cooperation from people familiar with the various schemes.

“The breadth of this nationwide conspiracy should be frightening to all who rely on some form of health care,” IRS criminal investigations chief Don Fort said in a statement. “The conspiracy … details broad corruption, massive amounts of greed and systemic flaws in our health care system that were exploited by the defendants.”

Attempts to reach defendants named by the Justice Department were unsuccessful. In several cases telephone numbers associated with the individuals were disconnected. Others did not respond to messages.

The investigation is continuing. Authorities asked doctors who have been involved with telemedicine and medical equipment fraud to voluntarily come forward.

Health care fraud is a pervasive problem that costs taxpayers tens of billions of dollars a year. The true extent of it is unknown, and some cases involve gray areas of complex payment policies.

Experts say part of the problem is that Medicare is required to pay medical bills promptly, which means money often goes out before potential frauds get flagged. Investigators call that “pay and chase.”

In recent years, Medicare has tried to adapt techniques used by credit card companies to head off fraud. Law enforcement coordination has grown, with strike forces of federal prosecutors and agents, along with state counterparts, specializing in health care investigations.

Officials said the government has options to recoup at least some of the money lost to Medicare, including seizing fraudsters’ assets and accounts, as well as property purchased with the proceeds of the scam.

The Medicare beneficiaries drawn into the orthopedic braces scam didn’t have to pay anything up front, but Cantrell said they have been harmed as well: A beneficiary’s private information, once in the hands of fraudsters, can be resold for many illegal purposes.

Additionally, if a beneficiary whose information was misused ever does need an orthopedic brace, he or she may encounter waiting periods from Medicare. The program limits how often it pays for certain supplies and equipment.

“It can be very attractive to receive equipment,” Cantrell said. “But after giving out your identifying information, it could be compromised to perpetuate additional fraud. There is no fraud without the ID number of a Medicare beneficiary.”