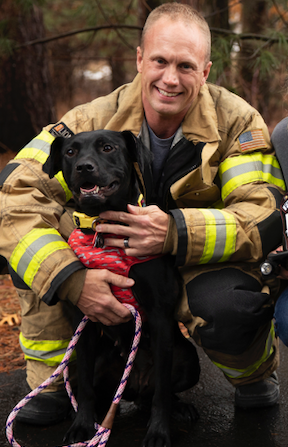 A labrador, who suffered severe burns after surviving a house fire last January, had found a “forever home” with a firefighter last Saturday.

The dog survived a house fire which killed other pets in the family, including her puppies. Her kennel melted around her, allowing her to escape. The plastic, however, also melted on to her, causing her to suffer grave burns.

Lexi was about to be euthanized, as her family believed it was the only option, when the veterinarian decided to seek help from the said rescue organization.

For a few months, Lexi stayed with her foster parent Sarah Hecklinski, who created an Instagram account dedicated to her recovery updates.

Meanwhile, firefighter Travis Oliver found the organization’s Instagram account and he “instantly fell in love,” empathizing with the dog’s pain from surviving a house fire.

“My heart literally broke for her,” Oliver said as per Fox 9. “I fell in love with her and knew she was my dog.”

Oliver then reached out to Hecklinski, who kept in touch until Lexi was ready for adoption. However, Ruff Start Rescue initially denied his application because he lived far from Minnesota.

Oliver, determined to be Lexi’s new family, emailed the organization explaining why he was drawn to the rescued pet. With the help of Hecklinski, his application was finally approved.

“I think they’ll understand what a fire does to a person who has to go through it and they can easily relate that to a dog,” Hecklinski was quoted as saying. Oliver, along with his family and his dog, traveled in a recreational vehicle (RV) for 11 hours to pick Lexi up.

The firefighter plans to share Lexi’s inspiring story to be able to help burn victims heal and deal with trauma. As per report, he already reached out to a camp dedicated to children burn victims, to introduce them to Lexi and share her story. Casey Eridio/JB