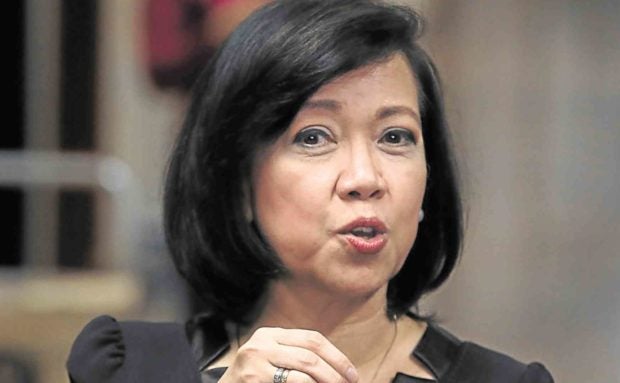 ILOILO CITY, Philippines — President Rodrigo Duterte has the duty to explain the significant increases in his family’s earnings instead of saying it was nobody’s business, former Chief Justice Maria Lourdes Sereno said here on Monday.

On the sidelines of a voter education forum on the University of the Philippines Visayas campus, Sereno said the explanation was more necessary amid allegations that members of the President’s family were involved in illegal drugs.

“I believe that we (government officials) should display a simple lifestyle. If an official is suspiciously wealthy, there should be an explanation. And the explanation should be made public,” Sereno said.

A three-part report by the Philippine Center for Investigative Journalism (PCIJ) found significant increases in the incomes of the President and his children, Davao City Mayor Sara Duterte and former Vice Mayor Paolo Duterte, while they were in office.

Using data curated from his statements of assets, liabilities and net worth (SALNs), PCIJ said the net worth of the President, a former mayor, rose 195 percent from P9.69 million in 2007 to P28.54 million in 2017.

PCIJ also found that the Dutertes had interests and engagements in at least 23 corporate entities but did not consistently declare them in their SALNs.

It claimed that they had an unregistered law firm and shares that they did not declare.

During a profanity-laden speech here on Saturday, the President said that whatever his family earned outside of politics was nobody’s business.

He came to his children’s defense, claiming that their wealth came from their businesses and law firms. He went on to say that he had also received inheritance from his mother Soledad Duterte, a schoolteacher.

“You yellows, all the time I was with my mother. Even when I was already mayor, my mother still fed me,” the President said, using a broad reference to Liberal Party members and critics of his administration. “She left us with money. But do I have to tell you how much?”

In a statement, PCIJ executive director Malou Mangahas on Sunday said that under the SALN law, all public officials should file “truthful and complete” disclosures of their assets, liabilities and net worth.

On Monday, presidential spokesperson Salvador Panelo said the President did not commit any violation since he put on record his assets and liabilities.

“What is prohibited is when you do not declare your assets. But he has declared them. So what’s the hullabaloo?” Panelo asked.

Sought for comment, Executive Secretary Salvador Medialdea said the SALNs requested by PCIJ were submitted before Mr. Duterte became President and were not in the possession of the Office of the President.

“It must be made of record that President’s critics and detractors had been nitpicking on the President’s SALN. They have tried to make an issue out of even the minutest detail in hopes to pin the President for some wrongdoing, but to their dismay, their efforts had all failed,” Medialdea said.

Instead of lashing out at investigative journalists and their reports, the President should turn his ire to Panelo, along with his other deputies, for their failure to respond to request letters for interviews for the past five months, PCIJ said.

“The President did not have to lose his cool,” Mangahas said.

“PCIJ had wished only the Dutertes to offer clear, direct, straightforward replies to our queries instead of blaming PCIJ for the report,” she said.

Mangahas said PCIJ reporters had exerted best effort to obtain the Dutertes’ side, by courier, fax and e-mail.

The center said it sent them two batches of request letters in October 2018 and in January.

The corporate documents and asset records used in the reports were also authenticated as certified true copies.

“It would have been far better had Mr. Duterte . . . Sara . . . and Paolo granted PCIJ’s request for comment, and possibly sit-down interviews, before the story ran,” Mangahas said.

She noted that PCIJ had reported on the wealth and controversies that hounded all five Presidents before Mr. Duterte, beginning with Corazon Aquino, whom Mr. Duterte’s mother actively supported from her Davao City hometown.

The National Union of Journalists of the Philippines said the President and his family were not exempt from the transparency mandated by the Constitution and the Code of Conduct and Ethical Standards for Public Officials and Employees.

“It is clear that the people need an explanation. He is not being accused (of any crime or violation) as of now,” she said.

Sereno was removed from office last year due to her alleged failure to submit some of her SALNs when she worked as a professor in UP Diliman before she was appointed to the high court.

She had explained that she then was not able to secure a copy from UP because these were missing. —With a report from Jhesset O. Enano