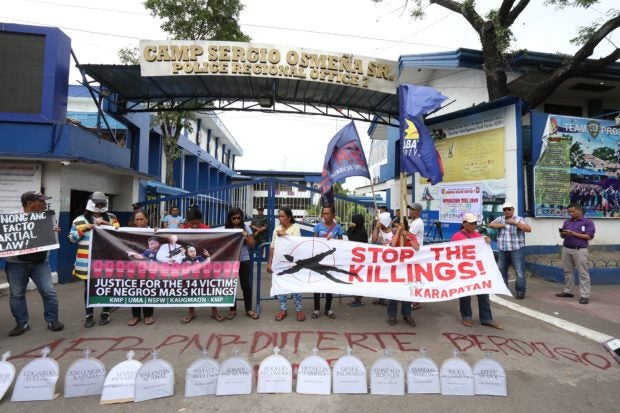 CEBU CITY — Human rights and farmers’ organizations in the Visayas want to hold accountable the police and military officials involved in joint operations that led to the killing of 14 farmers in two towns and a city in Negros Oriental province on March 30.

Twenty-one organizations conducted a fact-finding investigation into the killings and found that the farmers were summarily executed, contrary to the claim of the Philippine National Police that they fought back during the search of their houses for illegal weapons.

Danilo Ramos, chair of Kilusang Magbubukid ng Pilipinas, presented the results of the investigation during a news conference in Cebu City on Monday.

Pattern in the killings

“Accounts gathered by fact-finding teams from [the] victims’ families and witnesses showed [a] pattern—[policemen in full combat gear and wearing balaclavas] barged into the victims’ houses, [showed] defective search warrants for alleged weapons, shot the respondents … then planted fabricated evidence such as firearms and ammunition,” Ramos said.

“Worse, the perpetrators took away money and other valuables from the victims,” he said.

Malacañang blamed allegations of human rights violations in the raids on communist propaganda.

Police Gen. Oscar Albayalde, the PNP chief, insisted the operations were legitimate, as these were backed by search warrants.

But Bayan Muna chair Neri Colmenares asked on Monday why, if the operations were legitimate, did the policemen wear balaclavas?

“Under Rule 6 on the use of prescribed uniform in regular police operations, there should be nameplates and the serving unit should not be masked. Why were the police [masked]?” Colmenares said

He said Bayan Muna had obtained pictures of the raiding teams wearing balaclavas.

“They didn’t bother to introduce themselves and just kicked the door down. They didn’t even show the supposed search or arrest warrant. That’s because there was an evil motive right from the start. So all this talk about it being regular operation is hogwash,” Colmenares said.

“There’s been no investigation yet, but General Albayalde has already ruled that the operation[s were] legitimate. [There’s] really a cover-up here,” he added.

According to the fact-finding teams’ report, policemen in full combat gear, without nameplates and wearing balaclavas, carried out the raids in Canlaon City and the towns of Manjuyod and Santa Catalina between 2 a.m. and 5 a.m. on March 30.

Except for one victim, Sonny Palagtiw, all the farmers were shot multiple times in the body and the head, the report said.

Valentin Acabal was shot seven times, including to the genital area, while Edgardo Avelino was shot twice on the chest and once on the forehead.

Ismael Avelino was shot eight times, while Steve Arapoc was shot on the back while lying face-down on the floor. The wound on his chest was likely where the bullet exited.

The report said the farmers were not allowed to see the supposed search warrants and the family members were herded out of the house or into adjacent rooms, leaving the victims alone with the policemen.

After the shootings, the bodies were dragged into waiting vehicles without waiting for crime scene investigators to do their job.

Family members who were inside the houses were ordered out and policemen went in to “plant small-caliber firearms, ammunition, hand grenades or rifle grenades,” the report said.

“Barangay officials, including those who signed the PNP inventories of [the weapons] allegedly recovered from the crime scenes, arrived only hours after the raids and the killings had taken place,” it said.

It said family members were made to sign the inventories in front of armed men and without the assistance of lawyers or local officials.

The report questioned the regularity of the search warrants issued by Judge Soliver Peras of Regional Trial Court Branch 10 in Cebu City.

It pointed out that the search warrants were issued only by Peras when standard court procedure required applications to be filed with the trial court that had jurisdiction over the place where the warrants would be used.

For Canlaon, Manjuyod and Santa Catalina, the authorities should have applied for warrants with a court in Negros, not Cebu, the report said.

The Inquirer tried to get in touch with Peras on Monday, but was told that the judge was in Ozamiz City, where he had been assigned as assisting judge. He would return to Cebu after the Holy Week.

Detained Sen. Leila de Lima introduced a resolution on Monday seeking an inquiry into the killing of the farmers.

In the resolution, De Lima noted that the families of the victims reported that their loved ones were killed in the same way police killed suspects in President Duterte’s brutal war on drugs.

The recurring claim of suspects resisting arrest “has long been serving as a wrongful justification for the targeted and continuous killings around the country,” De Lima said.

An investigation must proceed, she said, adding that the government and institutions needed to develop systems to hold perpetrators accountable so that justice and the rule of law could be restored.

Former Chief Justice Maria Lourdes Sereno, in Iloilo City on Monday for a voter education forum, said there was an alarming pattern in the killing of subjects of search and arrest warrants.

Sereno said the police claim that the suspects fought back had become doubtful. —With reports from DJ Yap, Leila B. Salaverria and Nestor P. Burgos Jr.