Opposition hits gov’t for blocking their visit to Scarborough Shoal 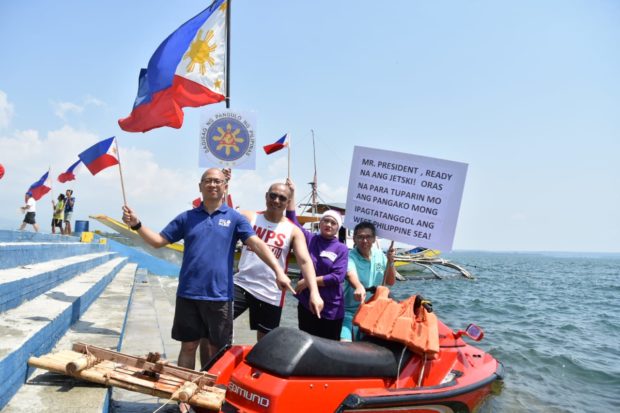 Otso Diretso senatorial candidates challenge President Duterte to fulfill his promise to ride a jet ski to the West Philippine Sea and to fight for the rights of Filipino fishermen. PHOTO from Otso Diretso

MANILA, Philippines — Opposition senatorial candidates denounced the Duterte administration on Monday for blocking their planned visit to the Scarborough Shoal and plant a Philippine flag there as a “symbolic positive step” to the arbitral award granted to the Philippines in 2016.

In a statement, they said the team originally planned to go to Scarborough Shoal but “the Philippine Coast Guard refused to give the boat owners permit if there is recording equipment in the rented boat, and warned that the equipment would be confiscated.”

(This shields the public from knowing what is happening in the West Philippine Sea and the Scarborough Shoal so they cannot express outrage over Chinese harassment of our fishermen.)

(The Scarborough Shoal is ours. In fact, this administration told our fisherman that they can freely fish in its waters, but the reality is they can’t.)

Alejano said the country should lead a consensus building in the international community to “pressure” China to respect the 2016 ruling of the Permanent Court of Arbitration in The Hague, which invalidated Beijing’s claim to almost the entire South China Sea.

Gutoc, a Marawi civic leader, meanwhile warned that the reported harassment against Filipino fishermen could result in conflict.

(What is alarming here is that we may be creating resistance from Filipinos. I don’t want this to happen because I’ve experienced war.)

Diokno, a human rights lawyer, for his part, pointed out how ironic it is that the government is preventing its people from going into a territory owned by the country.

(This is not just. I thought it was ours. It’s truly an irony that even our government is saying that it is part of the Philippines, but Filipinos can’t go there.)

(This is a sign of China’s control and the inability of our President to stand up against China.)

Hilbay was part of the Philippine legal team that defended the case against China before the international tribunal.

Read Next
Medialdea: Duterte critics only ‘nitpicking’ on his SALN
EDITORS' PICK
Duterte: Authorities may take over hotels, but it’s not a ‘remedy’ in a democracy
When will PH get enough COVID-19 vaccines? ‘I really don’t know,’ Duterte says
Smart introduces Smart Barkada with the launch of Double GIGA
LT Group, Inc. Notice of Annual Shareholders’ Meeting 2/2
Duterte defends govt’s efforts vs COVID in 2020
Smart is fastest 5G Network in PH – Ookla
MOST READ
‘Duterte a total failure as leader. He must step down’ – group
Duterte ‘privately’ dealing with China invasion in West PH Sea – Palace
Ramon Tulfo says gov’t running PH like a ‘headless chicken’
Stop acting like a colonizer, PH business groups tell China
Don't miss out on the latest news and information.