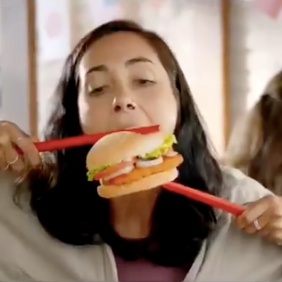 A Burger King chain in New Zealand drew flak recently for its ad that many have called racist. The ad was to promote the fast food restaurant’s new Vietnamese Sweet Chilli Tendercrisp burger and apparently showed white customers trying to eat the said burger using chopsticks.

The ad has since been deleted from the restaurant’s official Instagram account following the backlash. Many, however, did not find the ad amusing and took to Twitter where they aired their grievances.

A certain Maria Mo, a Korean New Zealander, shared the video via Twitter on April 4 and called out the fast food restaurant for the nature of its ad.

“So this is the new Burger King ad for a ‘Vietnamese’ burger ok,” she said in sarcasm “CHOPSTICKS [ARE] HILARIOUS…”

Later on, she expressed in other tweets that she is so sick of racism and called out Burger King for their silence on the issue:

“I’m so sick of racism. Of any kind. Of the kind that makes fun of different cultures, to the kind that shoots and murders those peacefully praying in their place of worship,” she said. “Say no to every single manifestation of it. #GiveNothingToRacism.”

“We [people of color] have said ENOUGH to make our point clear,” she added. “Where is your apology?”

Also @BurgerKing, @jono_key, @YandRNZ – ? Your silence is deafening. We PoC have said ENOUGH to make our point clear. Where is your apology?

Mo also could not believe that such ads still exist in this day and age, as per the Huffington Post on April 5.

“I couldn’t believe such blatantly ignorant ads are still happening in 2019, it honestly took me a second to work out what the heck I was looking at,” Mo was quoted as saying. “I was watching it thinking there must be some kind of layered twist — only to realize, no, there was no twist, it really was that base level.”

Mo’s post has since amassed over 4,000 reactions and over 3,000 tweets on Twitter since the time of posting. Other figures have also called out the establishment for their ad, such as writer-comedian Jenny Yang and Tech Crunch reporter Catherine Shu.

“What the hell is wrong [with] white [people]?” Yang said. “We’re not asking for much. Sometimes just decide to DO LESS.”

We’re not asking for much. Sometimes just decide to DO LESS.

“LOL chopsticks amirite??????” Shu tweeted on April 5. “Who the hell came up with this? There are a lot of Asian people in NZ, though they probably aren’t getting their Vietnamese food from Burger King.”

Who the hell came up with this? There are a lot of Asian people in NZ, though they probably aren’t getting their Vietnamese food from Burger King 🤢 https://t.co/XSGYX7IVBR

Italian fashion house Dolce & Gabbana was slammed just last January 2019 for a similar ad. In the ad, a Chinese model can be seen struggling as she attempted to eat pizza, spaghetti and a giant cannoli pastry using only chopsticks.

The model, Zuo Ye, has since apologized for her appearance in the campaign. Co-founders Domenico Dolce and Stefano Gabbana also apologized and promised they would do better to understand and respect Chinese culture. Cody Cepeda/JB